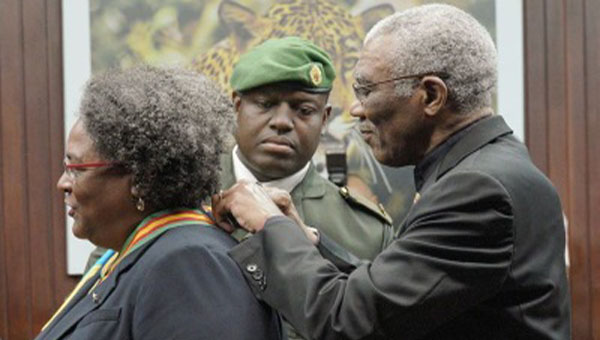 The Roraima Order is the second highest National Award of Guyana. Established in 1976, it is awarded to any citizen of Guyana, who has given outstanding service to the nation. Citizens of other countries, who are deemed eligible, may be appointed as honorary members.

President David Granger told the ceremony that to commemorate Guyana’s 50th anniversary of becoming a Republic, Guyana was paying special honour to Prime Minister Mottley, the first woman to head a government in Barbados.

Granger said that Mottley had distinguished herself as an ardent advocate of the CARICOM Single Market and Economy (CSME) that allows for the free movement of goods, skills, labour and services, across the 15-member regional integration grouping.

“We commend you, on your assumption as Chairman of the conference of heads of government of the Caribbean Community, and for your long-established commitment to Caribbean integration.”

Mottley, in response, after receiving the award, said she was looking forward to the relationship Between Barbados and Guyana, adding “we are also conscious that we face a number of existential threats, most critical of which is the climate crisis and the chronic non-communicable diseases.

“We do not have the population bases alone, we do not have the expertise or capital alone, to go on our own, and we look forward therefore, to working with the people of Guyana …in making sure that we can make this region  more secure and providing a prosperous and stable future for our people.”

Mottley also held talks with Opposition Leader, Bharrat Jagdeo, during her brief visit to Guyana, and will meet with officials of the Guyana-based CARICOM Secretariat, before her departure.