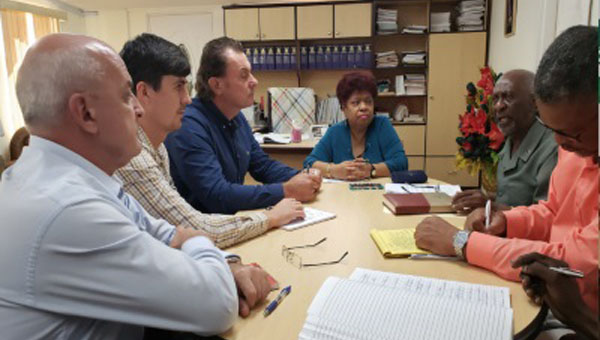 “The suspension of BCGI will have no impact on the Company’s overall performance, as the expected decline in the overall bauxite supply from Guyana, will be substituted with raw material from other mines,” the company said in a statement.

But the government said that it has not been officially notified of the dismissal of the workers.

Labour Minister, Keith Scott, and Social Protection Minister, Amna Ally, said that company officials held talks, yesterday, with officials from the Labour Department, where the termination announcement was made.

They said it was clear that RUSAL did not attend the meeting to seek an end to the impasse.

Scott said there was no notice to the Labour Department, that the company was moving to terminate the workers. The RUSAL company officials also informed the meeting that the union representing the workers had also not been informed.

“You are coming here, this morning, and saying that over 300 gone home and still there is no notice to us,” Scott said, adding the company’s position is unacceptable.

The Guyana Bauxite and General Workers Union (GBGWU) confirmed it had not received any communication on the matter, and reiterated that the company was attempting to influence the outcome of the March 2, general elections.

GBGWU sees this new act as part of the recent, calculated strategy to influence our elections, by creating social upheavals. The company is seeking to buy time in the hope that March 2nd delivers the desired results,” the union said.

The company said all its foreign employees have been relocated, and that the possibility of doing business in Guyana has declined.

“As the unrest impacting the Company’s operations continues, RUSAL believes the opportunities for doing further business in Guyana are now severely limited,” RUSAL said, indicating that the government and related agencies have not done anything to end the almost two-week blockage of the Upper Berbice River, after 142 workers had been laid off, because the company did not get duty-free fuel concessions.

Following the blockage, the company laid off another 146 workers, saying that the authorities have failed to enforce the relevant laws regarding arson and blocking of the river.

“As a result of serious illegitimate actions that have gone beyond the control of government and enforcement agencies, including arson of the electricity pylon basement and other corporate property, and blocking of the river, RUSAL considers it prudent to suspend and mothball operations of Bauxite Company of Guyana (BCGI),” the company said.

Ally said the company was wrong to lay off the workers, because of what she considers, “a management issue” that it was facing, in relation to its fuel situation.

She said her Ministry is concerned with the industrial relations situation, and the company ought to seek the help of the police and the Maritime Administration to address the blockage of the river.

She said the decision to send home the workers was illegal and advised RUSAL to initiate moves, now, to reinstate the workers.

Ally said the move by RUSAL, at a time when the campaign for the regional and general election is taking place, appears to be politically motivated, and that the company ought to be very careful with any such position.

But the RUSAL representatives denied any political involvement by the company or its officials.

RUSAL company officials and the Chief Labour Officer are due to meet on Friday.