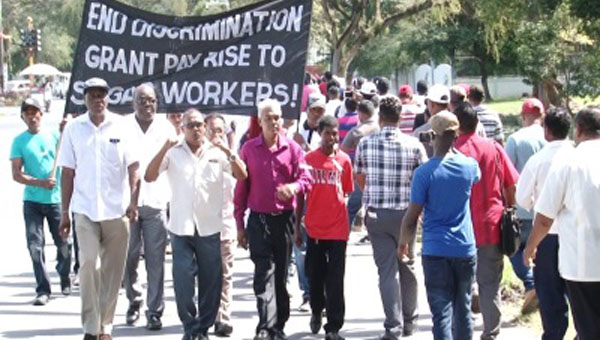 GEORGETOWN, Guyana, February 4, 2020 (CMC) – Sugar workers staged a peaceful protest, today, outside the Ministry of the Presidency, in support of salary increases.

“Since he took office as President, up to today, sugar workers have not received a cent increase, despite they have campaigned that they will give 20 percent increase, per year,” said GAWU General Secretary, Seepaul Narine.

Narine said sugar workers had submitted a petition, signed by thousands of workers, to Granger, last year, regarding salary increases, but that there has been no response from the coalition government.

“It has been a long time now, and we haven’t heard a single word from Minister Holder, nor has the President said anything back to us, on this matter,” Narine said, as the estimated 200 sugar workers, from the Albion, Blairmont and Uitvulgt estates, held a banner accusing the government of discriminating against them, since it came to power in 2015.

Last weekend, Granger, who is campaigning for the March 2 regional and general election, said former GuySuCo workers would be given an opportunity to own state-lands, as he announced the establishment of a State Land Resettlement Commission.

Granger, saying that he understood the suffering and plight of sugar workers, said he also wanted the sugar industry to be profitable.

But Narine warned that this would not be possible without a motivated workforce.

“If he cares so much, why is he failing to address the issue? We deserve an increase, like anyone else, every state sector employee, except those in GuySuCo, they are being discriminated against, not a single cent increase under his presidency,” Narine said.