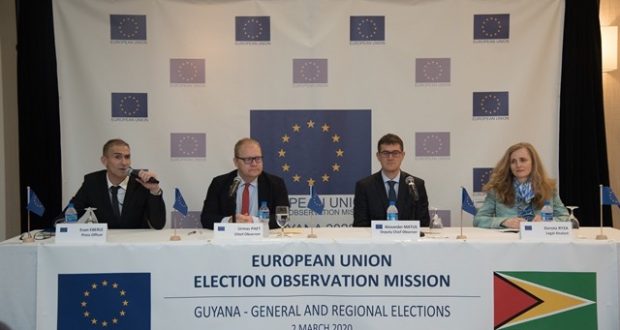 Members of the European Union’s Election Observation Mission respond to questions from reporters, during a press conference in Georgetown Guyana.

GEORGETOWN, Guyana, February 6, 2020 (CMC) – The European Union’s (EU) Election Observation Mission (EOM) has indicated its commitment to ensuring transparency and accountability in the general and regional elections, to be held on March 2.

During a media conference, today, EU EOM Chief Observer, Urmas Paet, stated that the mission’s mandate is to observe all aspects of the electoral process.

“The presence of the EU EOM demonstrates the EU’s commitment to the conduct of inclusive, transparent and credible elections in Guyana,” Paet said, noting that the observation not only focuses on election day, but also “on the entire electoral process, including the campaigning, the results and the resolution of any election-related dispute, after voting has finished”.

The Chief Observer emphasised that the mission will be impartial in its findings and conclusions.

“The Mission is independent in its findings and conclusions, and EU observers adhere to a strict code of conduct of international observers that requires strict neutrality and impartiality in the course of their work, and do not interfere in the electoral process,” Paet stated.

This is the largest EU EOM mission, which will comprise almost 50 observers. It includes a core team of nine analysts and 14 long-term observers, deployed to the 10 administrative regions. Twenty short-term observers will join the team, shortly before the March elections.

The mission was deployed to Guyana, following an invitation from President, David Granger.

The EU EOM uses the following criteria during its observation of an electoral process: the degree of freedom of political parties and candidates to assemble and express their views; the degree of impartiality shown by the election administration; the fairness of access to state resources during the election; the universal franchise afforded to voters; the degree of access for political parties and candidates to the media, in particular, the state media; the conduct of polling, counting and tabulation of votes; other issues related to the democratic nature of the election (e.g. legal framework; campaign violence; rule of law; and campaign finance).