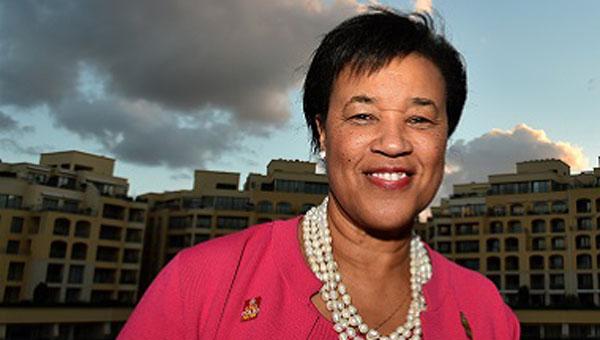 Dominica-born British lawyer, Patricia Scotland, Baroness of Asthal, poses on November 28, 2015 in St. Julian, Malta. The Commonwealth appointed its first female Secretary-General on November 27, 2015, when leaders chose Scotland to take over the running of the 53-country organisation. At their biennial summit in Malta, Commonwealth heads of government chose Scotland, a former attorney general to the British government, to take over from Indian diplomat, Kamalesh Sharma, on April 1, 2016. Photo credit: AFP/Alberto Pizzoli.

LONDON, England February 6, 2020 (CMC) – The future of Commonwealth Secretary General, Baroness Patricia Scotland, is uncertain, as governments in the commonwealth have, reportedly, rejected calls for her to be given an automatic second term in office.

According to the British Broadcasting Corporation (BBC), the leadership of the Commonwealth could be up for grabs, as according to Prime Minister, Boris Johnson, an alternative candidate could stand against Scotland – this is based on a letter obtained by the BBC.

The four-year term of Baroness Scotland, who was born on the island of Dominica, comes to an end next month.

However, it’s reported that diplomats fear that the over-50 member countries, most of them former British colonies, could face r a bitter internal battle over its future leadership.

On the other hand, a number of supportive member states, last month, suggested that she should get an automatic second term.

The BBC report said that Britain, which currently chairs the body, asked all 53 Heads of Government for their views and, last month, Johnson, in his letter, revealed that twice as many Commonwealth countries rejected the plan to offer Scotland another four years in office.

The Commonwealth leaders instead, agreed the future leadership of the organisation should be decided, when they meet in Rwanda, in June, for their biennial meeting.

Based on this, the Commonwealth agreed to give Scotland a short, three-month extension to her contract, which is due to expire on March 31.

The report quoted diplomatic sources as saying that Scotland has been campaigning, unofficially, for re-election, for some time.

Born in Dominica, Scotland was the 10th of 12 children of an Antiguan mother and a Dominican father. Her family moved to the United Kingdom, when she was a toddler. She was raised in the UK, pursued studies in law and was called to the bar 1977.

The Baroness has a long history of breaking barriers. In 1991, she was the first Black woman to be made a Queens Counsel. She later became the first Black female government minister in the United Kingdom, and the first woman and Black person to become Attorney General in that country.