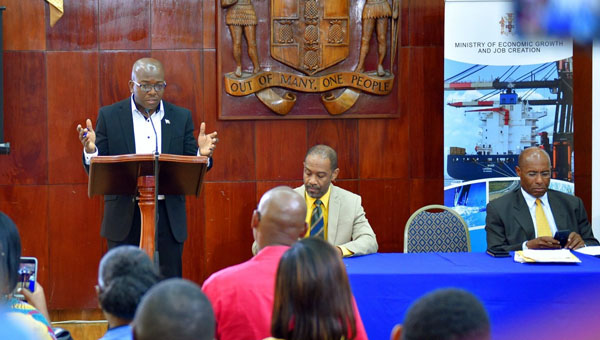 Minister without Portfolio in the Ministry of Economic Growth and Job Creation, Senator Pearnel Charles Jr. (at podium), addresses a press conference on drought mitigation, at Jamaica House on February 6. At the head table (from right) are Chairman of the Board of Commissioners, National Water Commission, Senator Aubyn Hill; and Director of the Meteorological Services Branch, Evan Thompson. Photo credit: Yhomo Hutchinson/JIS.

KINGSTON, Jamaica, February 7, 2020 (CMC) – The Jamaica government says it is implementing several measures to supply water to communities, as the country deals with a prolonged drought situation.

The Meteorological Service, here, is projecting that Jamaica will be experiencing near-normal rainfall in some areas and moderately dry conditions, up to, at least, April.

Minister without Portfolio in the Ministry of Economic Growth and Job Creation, Pearnel Charles Jr., said the multi-sectoral approach to drought management is being undertaken, to minimise the effects of the dry period on Jamaicans.

He said a Drought Management Committee, which is a subcommittee of the Integrated Water Resources Management Council, has been established to manage, in a proactive way, the execution of the drought management plan.

The committee, chaired by the Office of Disaster Preparedness and Emergency Management (ODPEM), will include representatives from the National Environment and Planning Agency (NEPA); Ministry of Health and Wellness; Ministry of Local Government and Community Development; Ministry of Economic Growth and Job Creation; RADA; and Rural Water Supply Limited; among others.

Charles Jr said that 20 catchment tanks will be fully renovated by March, and that 38 schools will be fitted with rainwater harvesting systems, also by that month.

He said more trucks will be procured to assist in distributing water to the hardest-hit areas.

“During the drought period, the fee for sterilisation is proposed to be waived, something, which several truckers that we have interacted with and engaged, have indicated as one of the obstacles to them doing more trucking,” he noted.

Charles Jr. said the government’s efforts to distribute tanks will be ramped up, to assist Jamaicans to increase their storage capacity, and that more than 100 one-thousand-gallon storage tanks have been distributed to the hardest-hit communities.

“We are improving our infrastructure; we are improving our maintenance systems; we are introducing systems, now, that will ensure greater sustainability; we are enhancing communication; and we are increasing capacity,” Charles Jr. said, urging Jamaicans to recycle, where possible, check and fix leaks in their homes and retrofit homes with water-saving taps.

Last month, the Barbados-based Caribbean Drought and Precipitation Monitoring Network (CDPMN) said the entire Caribbean basin should monitor their water supply, and adopt conservation measures, as much as possible, as drought situations continue to worsen throughout the region.

The CDPMN said with rainfall varying across the Caribbean during December 2019, the impacts of the current dry season are likely to play out, differently, across the region.

It said, apart from Barbados, water availability concerns exist over other islands of the southern and south-eastern Caribbean, Antigua, Cayman Islands, and parts of the Dominican Republic, Jamaica and Belize, by the end of May.