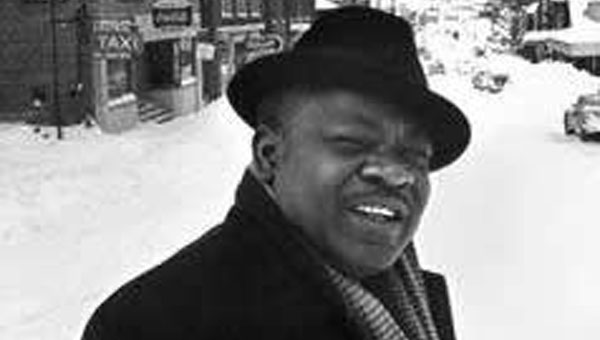 Saint-Firmin Monestime was a Haitian-Canadian politician and medical doctor, who was the first Black Canadian elected mayor of a Canadian municipality.

In 1963, Saint-Firmin Monestime, a Haitian-Canadian politician and Medical Doctor, became the first Black elected Mayor of a Canadian municipality — the northern Ontario town of Mattawa, with a population of 3000. The town is largely made up of people from English, French and Native heritage, and is best known for its role in the early fur trade and for logging and lumbering.

Born in Cap-Haïtien in 1909, Monestime settled in Quebec in 1945, but his medical qualifications were not recognized by the province. So he went back to medical school, at the University of Ottawa, graduating as a doctor in 1951.

Monestime eventually decided to set up practice in Timmins, but changed his plans, while driving north to scout the city. While eating at a restaurant, its owner told him that one of the town’s doctors had just died and that he’d be willing to provide Monestime with an apartment and office space, if he were willing to stay.

The doctor agreed, and the people of Mattawa welcomed him and his family, then the only Black residents in the town. He also became increasingly interested in politics: a proud Progressive Conservative, he was drawn to the party, in part, because of former Canadian Prime Minister, John Diefenbaker’s government’s introduction of the Canadian Bill of Rights, in 1960.

The interest then turned to action. In 1962, Monestime was elected to council, and in 1964, made history when he became the first Black mayor in Canada.

He later became a National Director of the Progressive Conservative party and remained active in local politics until his death in 1977. Mattawa finalized its 125th anniversary activities on New Year’s Day 2010, with the announcement, by Mattawa Mayor, Dean Backer, that council had approved the name of Mattawa’s Main Street as Monestime Way.

Dr. Lewis trained as a registered nurse, and graduated from Dalhousie University with a Diploma in Teaching in Schools of Nursing. In 1988 she entered provincial politics and was the first Black woman in Nova Scotia to run in a provincial election.

A member of the Order of Canada, Dr. Lewis passed away in 2013 of an undisclosed illness

Anderson Ruffin Abbott was the first Canadian-born person of African heritage to become a doctor in Canada. At the age of 23, he earned his M.D, after meeting the licensing standards of the Medical Board of Upper Canada.

His parents, Wilson and Ellen Ruffin, identified as free persons of colour, were forced to leave Alabama, due to the racial tension and unrest following the 1831 Nat Turner slave rebellion. They were warned, anonymously, to go.

Anderson Abbott attended the Buxton Mission School, near Chatham, Ontario, established in 1850, to educate Black children from the nearby Elgin Settlement, where freed slaves had built a successful farming community.

Later, Anderson Abbott was one of the first three Black students accepted at the Toronto Academy of Knox College, where he was an honour student. In 1856, he enrolled in Oberlin College in Ohio, an innovative school, which was not segregated and was also the first coed college in the United States.

By 1857, he returned to Canada and enrolled at the Toronto School of Medicine, then an affiliate of the University of Toronto. When President Abraham Lincoln, was shot by an assassin on April 14, 1865, Anderson Abbott was among a small group of doctors, friends and family, who stayed with the dying president.

After the president’s death, his wife, Mary Todd Lincoln, sent Anderson Abbott the houndstooth shawl that Lincoln had worn to his inauguration, in appreciation. It is now on display at the Wisconsin Historical Society.

Abbott also became coroner of Kent County in 1874, the first person of African ancestry to be appointed. He died in Toronto in 1913, age 76.

Abraham Beverley Walker is considered the first Canadian-born Black lawyer. Walker was born near Saint John in August, 1851, and educated, locally, before studying law at the National University School of Law in Washington.

He became a lawyer of the Supreme Court of New Brunswick in 1881 and was called to the bar, the following year.

Walker later took some courses at the Saint John Law School, becoming the first student of color to enroll. He subsequently opened a law practice in Saint John, but racist attitudes from the community made it hard to get clients, and the practice foundered, after just a few years. A petition was circulated by the local Black community to get Walker the designation of Queen’s Counsel. He was told that he would be receiving it, but when the local white lawyers found about it, they complained to the government and said ‘If you give him that designation, then you can take ours back’ – so he was dropped off the list.

Walker was later promised designation of King’s Counsel, but that also didn’t happen. In one instance, there was a big gala for the law society and every lawyer in the city was invited, except Walker. “He would be the only New Brunswick Black lawyer for another for 122 years.”

On October 30, 2019, in Fredericton, Abraham Beverley Walker was honoured, posthumously, with the Order of New Brunswick.

A New Brunswick historian, Peter Little, ruefully stated that Walker’s accomplishments have been all but forgotten by history. 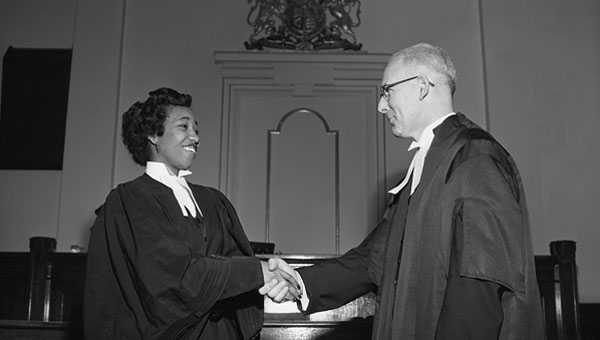 King attended the University of Alberta in 1948, financing her studies, by teaching piano lessons in Edmonton. Out of 142 students, King was one of only three women in the Faculty of Law.

She obtained a Bachelor of Arts degree in 1952 and received her LLB degree in 1953. King was the first Black person to graduate from law school in Alberta and the only woman in her graduating class. She was called to the Alberta Bar on June 2, 1954, and became the first Black female lawyer to practise law in Canada.

In 1978, the Ontario Black History Society (OBHS) was established. Its founders, including Dr. Daniel G. Hill and Brooks, presented a petition to the City of Toronto to have February formally proclaimed as Black History Month.

Barbara Howard was the first member of a visible minority to be hired by the Vancouver School Board, where she taught for 43 years. A Canadian athlete and sprinter, she won two relay medals at the 1938 British Empire Games, held in Sydney Australia.

She is also believed to be the first Bblack woman to represent Canada in an international competition. Although she intended to continue in her international track career, the outbreak of World War II meant that the Olympics in 1940 and 1944 were cancelled. By the time international sporting contests resumed, Howard was beyond her prime. She later became a teacher, and died on January 26, 2017, at the age of 96 years.

Natasha Prest is the first and only Black female professional firefighter in the Halifax region. Before she joined the fire service, Prest worked in finance at a local hotel and also part-time, serving snacks at the Halifax Metro Centre.