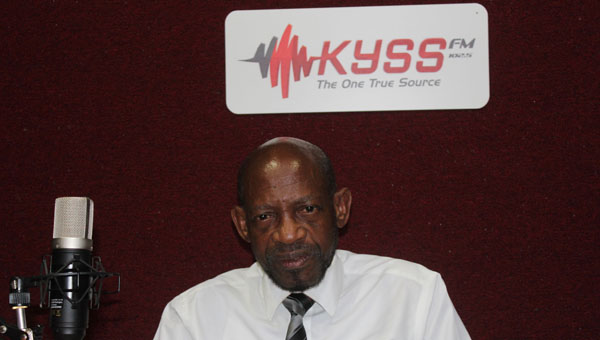 BASSETERRE, St. Kitts-Nevis, February 13, 2020 — St Kitts and Nevis’ Opposition Leader, Dr. Denzil L. Douglas, said, Tuesday night, that the Cannabis Bill 2020, which was to be debated in the National Assembly, yesterday, “complicates rather than simplifies, and stifles rather than liberates, the present state of play, as related to cannabis and its uses”.

During his weekly call-in radio program, “Ask the Leader”, on Kyss 102.5 FM, on Tuesday night, Dr. Douglas pointed out that the Cannabis Bill 2020, which replaces the Cannabis Bill 2019, that had its first reading, last August, is limited to establishing rules and regulations surrounding the cultivation, supply, possession, production and use of medicinal cannabis — only.

“This is a very important distinction for all, who may be tricked into believing that this Bill will govern the personal or religious use of “Cannabis”, as defined under the present Drug Act.

“Unlike the first version of the Bill, this new Bill does not deal with the use of regular Cannabis at all. In fact, it has completely removed all of Part II of the 2019 Bill that deals with the use Cannabis for Religious Purposes,” said Dr. Douglas, who further pointed out that the new Bill creates two separate classes of the plant, without establishing criteria for such classification.

He explained that the term “cannabis” is defined under the Drugs (Prevention and Abatement of the Misuse and Abuse of Drugs) Act as ‘any plant of the genus Cannabis and any of its parts’; and ‘medicinal cannabis’, as defined under the new Bill, simply, and very vaguely, as ‘cannabis cultivated for medicinal purposes or cannabis manufactured for medicinal purposes or a medicinal cannabis product.’

Dr Douglas said this ambiguity creates a lot of confusion in peoples minds which is dangerous for two important reasons.

“While the new Bill has removed all of the rules and regulations governing the religious use of cannabis, it still ventures to regulate the use of medicinal cannabis for use at a place of worship.

“This is very misleading, because while Section 39 of the new Bill appears to be granting permission for the use of medicinal cannabis at a ‘place of worship’ for ‘spiritual healing, upliftment or edification’ without limitations – it only allows this in the use of medicinal cannabis. This makes no sense whatsoever, and it makes a mockery of the sacramental rituals and practices of the Rastafarian community,” said Dr. Douglas.

He further pointed out that for Rastafarians to be able to use cannabis, legally, in their religious practices, it therefore means that they will only be able to obtain it at a registered place of worship, which will have to be registered, as such, in advance, and issued a license to use only the version of cannabis that is going to be designated as medicinal cannabis.

“If, for instance, the criteria that what will end up distinguishing regular cannabis from medicinal cannabis would be the proportion of the CBD content vs the THC content, this can have implications for the sacramental use of cannabis.

“One may be using cannabis for sacramental use, but it may not be the right type of cannabis. This is misleading and ambiguous and it is wrong. It means that use of regular cannabis remains outlawed over 56 grammes (2 ounces),” Dr. Douglas told listeners.

He also said that the new Cannabis Bill is also very misleading to persons, who may believe that the changes identified in the new Bill apply to the use of regular cannabis.

In fact, even the new Bill applies a fine of up to $500 to persons caught cultivating, supplying or obtaining 56 grammes or less of medicinal cannabis without a license, he noted. 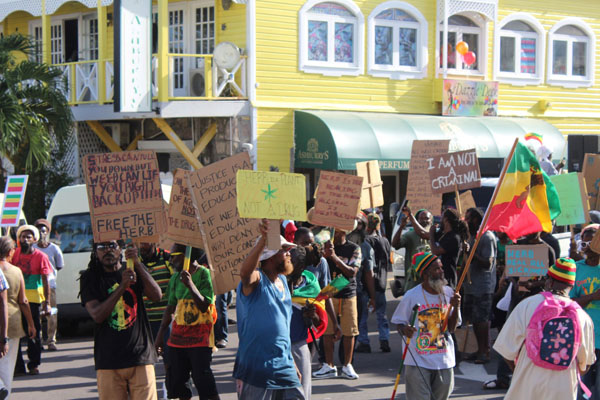 The Rastafarian Community in St. Kitts-Nevis seen demonstrating in the capital in 2019. Photo contributed.

“The penalty is even greater for those cultivating or supplying more than 56 grammes, wthout a licence, with a fine of $75,000 or imprisonment of up to two years. There is no provision for the use of Cannabis for personal use, as the new Bill provides only for the use of medicinal cannabis, which can only be accessed by obtaining a prescription from a doctor, after demonstrating a ‘qualifying medical condition’. Any use or possession of regular cannabis, or even medical cannabis, for recreational purposes is still strictly prohibited,” said the former prime minister, who pointed out that the new Drugs Act (Amendment Bill) increases the amount that persons are allowed to possess from 15 grammes to 56 grammes.

“However it is still a ticketable offence that comes with a $50 fine, community service or up to 3 days in jail. The amount of cannabis resin that persons can carry has been raised from the 5 grammes that was imposed in the last Amendment to the Bill that was made and puts it back to the orginal 15 grammes, which was in the original Act,” he added.

He referenced Section 7 of the Drugs Act that still outlaws the cultivation of regular Cannabis.

The new 2020 Amendment Bill only proposes to eliminate the new subsection (3) that was added, that gave the Minister the power to issue licenses for the cultivation of medical cannabis. That power now lies in the hands of the Medicinal Cannabis Authority, Dr. Douglas claimed.

Levelling further criticism at the draft legislation, Dr. Douglas said that the Bill would force doctors to report persons, who have been prescribed medicinal cannabis for their inclusion in a national register and to give a report, every 90 days, as to whether the patient continues to suffer from the qualifying medical condition or in their care is a breach of doctor/patient confidentiality and privacy.

This he suggested ought to be debated with the St Kitts and Nevis Medical Association, as it is a breach of privacy between a patient and a doctor.

“This is why we say that the new Cannabis Bill 2020 is a restrictive Bill that would stifle rather than unlock and liberate a thriving Cannabis industry. In its present form it will do very little to allow St. Kitts and Nevis to tap into this cutting-edge industry and effectively leverage all the possibilities that such an industry can bring,” said Dr. Douglas.

With general elections to be called soon,Dr. Douglas reiterated that the NextGen SKN Labour Party administration will ensure that its policy is pioneering and will maximize the full potential of the new Cannabis industry.

“A new NextGen SKN Labour Party administration will repeal this new Bill if passed.  Our NextGen SKN Cannabis Bill will not be about winning votes, but about giving our people the freedom to unleash their potential and create intergenerational wealth,” said Dr. Douglas, the national political leader of the SKNLP.

He accused the Timothy Harris-led coalition of presenting the Cannabis Bill, “as a campaign gimmick, designed to mislead and deceive the people” that the government is serious about creating a new industry, here, in St. Kitts and Nevis.