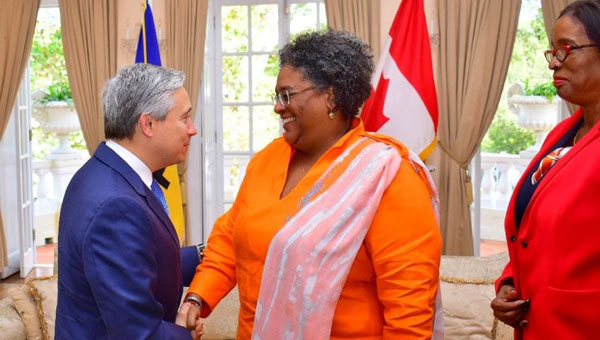 During the hour-long talks, Prime Minister Mottley spoke about Barbados’ economy, saying that although the country was not fully out of the woods, it was a long way from where it was, two years ago.

The Prime Minister stressed that sustained growth was required to take it to the next level, and added that the Government was committed to ensuring it occurred.

She noted that Canada had assisted Barbados in a number of areas over the years, and identified two new programs, for which assistance was required.

She noted that Barbados and Canada had worked, very closely, in the past, and underscored the importance of that relationship growing.

Champagne is representing Canadian Prime Minister, Justin Trudeau, who was to be the special guest at the 31st Inter-sessional Conference of Heads of Government of the Caribbean Community, which takes place, today and tomorrow, at the Lloyd Erskine Sandiford Centre.

Trudeau was to make the trip, because of pressing domestic issues.