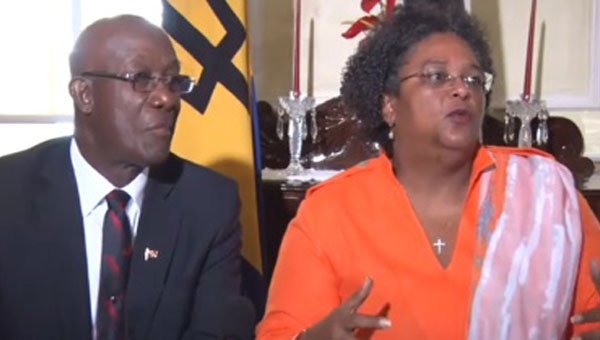 Barbados And Trinidad To Collaborate On Diplomatic Postings

BRIDGETOWN, Barbados, February 18, 2020 (CMC) – Barbados and Trinidad and Tobago have agreed to enter into a Memorandum of Understanding (MOU), which will allow the two Caribbean Community (CARICOM) countries to establish joint commissions in several countries, in an effort to increase its diplomatic presence.

Some of the countries identified for shared missions include Ghana, South Africa, Nigeria, Kenya, South Korea and Abu Dhabi. The joint missions in Ghana and Kenya are expected to be operationalized this year.

“We live in a time, where fiscally, it is difficult, all around, but by the same token and, more importantly, we are pursuing efficiency, where we can, and to that extent, we recognise that if we can work together, in as many areas as possible, to the benefit of the taxpayers of Trinidad and Tobago and Barbados, then we would have added value to them,” Barbados Prime Minister, Mia Mottley, told a news conference.

She recalled that in 1966, Barbados shared diplomatic arrangements in London with Guyana, adding “this is not anything that is unknown to sovereign nations, and to ourselves as a sovereign nation”.

“I can understand at the beginning of independence, there was a greater desire to establish pre-eminence, and especially in markets, where we have large Diaspora populations…but in this global village, we are required to be present, but we may not necessarily have the capacity to go on full throttle on our own,” she explained.

She defended the new arrangement, noting that “on many of the foreign policy issues, we are aligned, with respect to our positions”.

“It does not, in any way, diminish the role of capital, but it allows us to be far more effective, because small states need commercial diplomacy,” she said, making reference to the Trinidad and Tobago-based Republic Bank having more than 41 branches in Ghana.

A High Commissioner, appointed based on this model, will serve for a period of two years, with both countries sharing the cost of the mission, accommodation and staff.

Rowley said this move was especially necessary, given the serious diplomatic initiatives that are on the cards for both countries.

“As a matter of fact, I am on my way to Ghana, in a few days time, having been invited to be their guest of honour at the celebration of the end of the year of return at Ghana’s National Day. We also have interest in energy, commerce, culture and diplomacy.

“So what we have agreed to do, finally, is that where we have missions in that part of the world, that Trinidad and Tobago and Barbados will enter into a Memorandum of Understanding, where we would share a mission,” he told reporters.