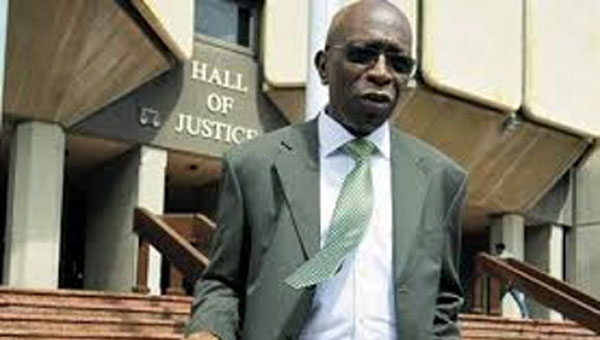 PORT OF SPAIN, Trinidad and Tobago, February 18, 2020 (CMC) – The Court of Appeal has agreed with former government minister, Jack Warner, who challenged a 2018 High Court ruling, ordering him to repay an estimated TT$1.5 million to a financier, of the main opposition United National Congress (UNC).

Warner, who was then the Chairman of the opposition party, had denied the funds were a loan, given by financier, Krishna Lalla, and his company Real Time Systems Ltd., claiming that they were to be used to assist the party in the 2007 general election.

Real Time Systems Ltd. filed the lawsuit against Warner, trading as Dr. Joao Havelange Centre of Excellence, Renraw Investments, CCAM and Company and centred on a series of payments made to his companies, between October and November 2007.

The lawsuit sought to retrieve the “loan”, given to Warner, the former FIFA Vice President, before the general election campaign of 2007.

In 2018, Justice Franck Seepersad ordered Warner to repay the funds, indicating that based on the evidence, on a balance of probabilities, “it was more likely than not”, Lalla advanced to Warner significant sums, as part of a loan arrangement.

In his judgment, Justice Seepersad said that all the evidence, including e-mail correspondence, between Lalla and Warner, suggested the money was transferred as part of a loan arrangement.

“On a balance of probabilities, this court is of the view that Mr. Warner may have wanted to portray an image to the UNC, that he was its main financier, but to do so, he sourced finance from Mr. Lalla, on the basis and expectation that the sums advanced, would be repaid upon his receipt of an anticipated payment of a US$10 million FIFA payment, due in February 2008,” Seepersad said in his 2018 ruling.

“Money advanced to fund elections has, for far too long, played a central and dominant role in this Republic’s politics. In the absence of regulations, financiers can legitimately purchase goodwill and exercise undue influence over politicians and political parties.

“The absence of campaign finance regulations has led to a culture of kickbacks and corruption, and although within the recent past, some progress has been made, by virtue of the enactment of procurement legislation and the appointment of the procurement board, the dire need for a proper regulatory framework has to be prioritised and election campaign finance reform should be effected, as a matter of urgency,” Justice Seepersad said then.

But in upholding Warner’s appeal on Friday, the Court of Appeal also cautioned judges against engaging in “judicial activism”.

The Court of Appeal agreed that Justice Seepersad made material errors in his assessment of the evidence, in coming to the conclusion that the money was advanced to Warner as a loan.

Justices Gregory Smith and Charmaine Pemberton found that certain statements, made by Justice Seepersad in his judgment, as it related to campaign financing, which were complained of by Warner, “in their entirety, would lead to a real possibility” that the “trial judge’s personal views on the morality or ethics behind unregulated campaign financing coloured his views against a public official, who accepted unregulated campaign funding.

The two Court of Appeal judges said even if the appeal by Warner and his companies was not allowed on the main complaint, it would have been remitted for rehearing before another judge because of apparent bias.

But Justice Judith Jones, disagreed on the apparent bias point, saying Warner was required to show more than a mere suspicion of bias on the part of the judge.

However, she acknowledged “there is no doubt that the judge’s comments were unnecessary, to what he was called upon to determine and added nothing to the conclusions he arrived at.

“The statements were made at the end of the judgement and are a prime example of what has come to be known as judicial activism,” she said, reminding that “judges have a duty to hear cases, presented before them, impartially and without prejudice.

“In order to discharge that duty, a judge should refrain from language or comments that may result in a reasonable apprehension that they may not be able to impartially adjudicate in that area of the law in the future.”

On whether Warner had established that the five cheques he received from Lalla were donations for campaign financing, the Court found that Warner had “established his case” that they were, and were not a loan to assist with liquidity problems.