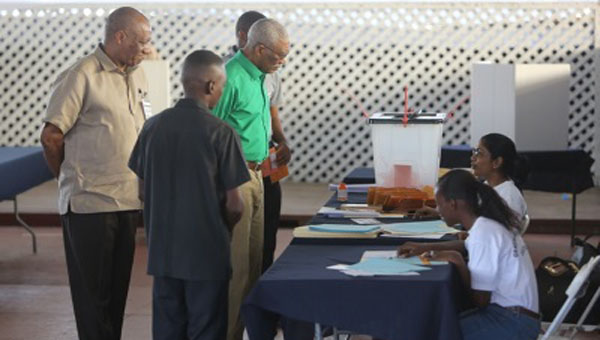 GEORGETOWN, Guyana, February 21, 2020 (CMC) – President, David Granger, said, today, he is “very satisfied with the turnout”, as members of the security forces began casting ballots, ahead of the March 2 regional and general elections in Guyana.

“The process is smooth; it is proceeding without interruption. I am very satisfied with the turnout, and I think the people of Guyana can be assured that the disciplined forces are performing their civic duty,” said Granger, who, under the Guyana Constitution, is the Commander-in-Chief of the Guyana Defence Force (GDF).

But Opposition Leader, Bharrat Jagdeo, in a statement posted on his Facebook page, said prior to the vote, that the main opposition People’s Progressive Party/Civic (PPP/C) is “aware” that a few “senior officials of the joint services have been trying to intimidate ranks and officers to vote” for the coalition administration — A Partnership for National Unity/Alliance For Change (APNU/AFC).

“We urge you not to be intimidated, as your right to vote for a political party of your choice is constitutionally enshrined. Your vote is also secret and there is also no way of determining who you vote for, as ballots cast tomorrow will not be counted at the place of poll, but rather, they will be added to those cast on March 2,” Jagdeo wrote.

GECOM said that an estimated 10,226 members of the disciplined forces are eligible to cast ballots at the polling stations across the ten regions.

In a statement, the Guyana Defence Force (GDF) said that only accredited persons will be allowed to observe the votes being cast by the disciplined forces.

Granger, who visited Base Camp Ayanganna and the Police Officers Club, accompanied by senior government officials, indicated his satisfaction with the punctual start of the voting process, and emphasised his visit was not, in any way, an obstruction to the procedure.

He said he expects the same efficiency on March 2.

“I expect that, on the second of March, the national process will be equally satisfactory executed by the elections commission, which has responsibility for that function,” he said.

GDF Chief of Staff, Brigadier Patrick West, was the first to cast his vote at Base Camp Ayanganna, and is expecting a 95 percent turnout.

He said those who were not able to vote, today, will do so, with the general public, on March 2, and that every soldier has the right to vote for the political party of his/her choice.

“Anybody could appeal to any citizen, at the end of the day, we are all citizens of Guyana, and we will all have those choices to make, now and in the future, and I do not see anything wrong with political leaders sharing, from their own platform, their intentions about what they will do for Guyana,” Brigadier West said.

Commissioner of Police, Leslie James, who also cast his ballot, expressed his satisfaction with the easy flow of the voting process.

Meanwhile, the PPP/C has issued a statement saying it is “deeply disturbed” by the recent decisions of GECOM, to reduce the number of polling places, “especially in PPP/C strongholds”.

“We consider this latest development, as yet another attempt by GECOM, to frustrate voters, suppress and hinder voting and create possible confusion on Elections Day,” the party said, adding that it was calling on the technical advisors from the Commonwealth and Canada, “all the election observer teams in Guyana, the diplomatic community and civil society organizations to note our concerns and to join us in our efforts to ensure that the Guyanese electorate gets a free and fair opportunity to exercise their democratic right to vote on March 2, 2020”.