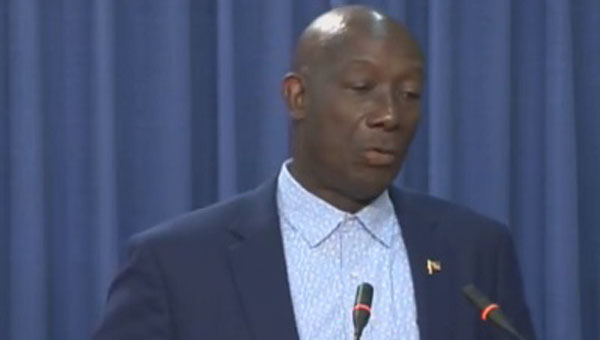 PORT OF SPAIN, Trinidad and Tobago, February 21, 2020 (CMC) – Prime Minister, Dr. Keith Rowley, says he intends to seek legal advice, in response to a ruling, by a High Court judge, earlier this week, calling on him to re-consider the report, compiled by the Law Association of Trinidad and Tobago( LATT), as part of the efforts leading to the possible impeachment of the Chief Justice, Ivor Archie.

“In the judgment, there is the intangible of a request to consider. I respect the courts of Trinidad and Tobago, and if there is a request for reconsideration, nothing could be easier and cheaper,” Rowley told reporters, noting that as he has done before, “I do not advise myself in matters of law. And I will be advised by my legal assistant”.

Justice Vasheist Kokaram, on Wednesday, ruled that Prime Minister Rowley had taken “irrelevant issues” into consideration, when he dismissed the LATT’s report on the allegations against the Chief Justice, including his view that the association, representing lawyers, here, was “a political tool” of the opposition.

In a 173-page ruling, the judge said Rowley “muddied the waters of what should be a purely objective exercise, of determining whether there was a prima facie case of a serious act of misconduct or inability to perform his function, warranting the removal of the Chief Justice”.

However,  in his ruling, Justice Kokaram did not support the argument of the LATT, that Rowley’s overall handling of the LATT report was “irrational and unreasonable”, noting that the decision was logical, in the Prime Minister concluding that the allegations against Justice Archie were insufficient to make the referral to the President.

Jamaican Queen’s Counsel, Dr. Lloyd Barnett, representing the LATT, had earlier argued that Prime Minister Rowley, who, in July last year, had refused the association’s request, fell short of his duty, under Section 137 of the Trinidad and Tobago Constitution.

Under Section 137 (3) of the Constitution, Rowley has the power to advise President, Paula-Mae Weekes, to appoint a tribunal to investigate the allegations against Archie. The President can refer the question, of whether a judge should be removed from office, to the Judicial Committee.

Rowley, speaking to reporters at the end of the weekly Cabinet meeting, on Thursday, said that he intends to stay away from any controversy on the matter.

Prime Minister Rowley said he went as far as providing LATT with legal advice, he obtained from a London’s Queen’s Counsel, “independent of my own office…independent of this country”.

But he said some people felt “I had not done what they wanted done, and proceeded to the court”, and that he was “not surprised” and was “quite pleased” that the judgment of the court had been published, “so the population knows that a judge has looked at, what the Prime Minister did, and came to the conclusion that the Prime Minister of Trinidad and Tobago, who was invited into this kangkatang, has not acted unreasonably… has not acted illegally….has not acted improperly. And that is all I am concerned about”.

Rowley said the population can sleep well, knowing that Justice Kokaram has concluded that “there is nothing there for me to answer”.

Media reports had linked Archie to discussing security arrangements for judges with a personal friend, and was also accused of attempting to fast-track Housing Development Corporation (HDC) applications for various people.

Archie has denied discussing judges’ security, but admitted to recommending people for housing.