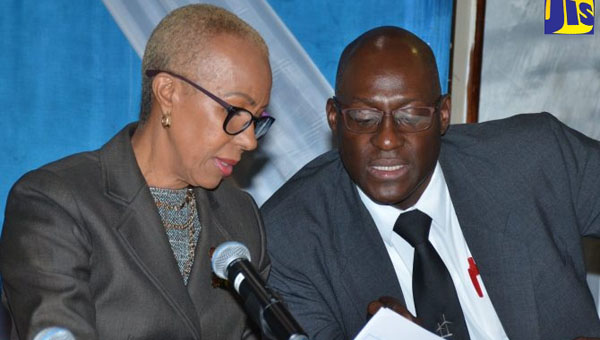 Minister of Science, Energy and Technology, Fayval Williams (left), discusses an important aspect of a document with Principal Director for Energy in the Ministry, Fitzroy Vidal. Occasion was a press conference held at the Trafalgar Road offices of the Petroleum Corporation of Jamaica (PCJ), yesterday. Photo credit: Mark Bell/JIS.

KINGSTON, Jamaica, February 25, 2020 (CMC) – The Jamaica government says it is focused on ensuring the highest standard of safety in the petroleum trade, after one person was killed, following an explosion and fire that damaged a gas station in Mandeville, a town in west-central Jamaica, last Friday.

“This is something we would not like to be repeated, at any one of our 320 stations, across Jamaica. I know that there is much to be done, in terms of the petroleum trade,” said Science, Energy and Technology Minister, Fayval Williams. 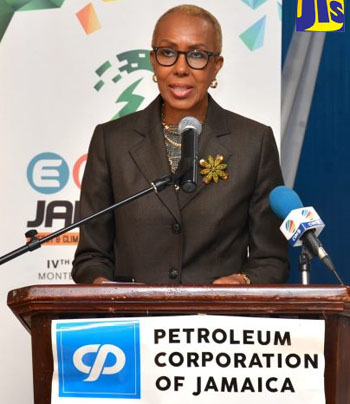 Seven people were also injured in the explosion, and Williams, who had earlier visited the facility, to meet with management and staff as well as to get a first-hand view of the damage, noted that while the station passed all safety checks, done last year, it was recognised that there are gaps that need to be addressed.

She said that even though the turnover of certain jobs at gas stations is quite high, “that does not excuse the owners in ensuring that as soon as new people come on, that the training is done, so that it heightens their awareness of the safety regulations at the service stations, at which they work”.

The Minister further pointed out that the government is working to finalise regulations governing the petroleum sector, during this year, and that the laws are to be amended to include the many recommendations that came out of the Petroleum Trade Reform Committee in 2016.

This Committee had a mandate to undertake a comprehensive review of the regulations and protocols, governing the petroleum trade in Jamaica, and among its recommendations are: the clarification of the roles and responsibilities of the various government entities, involved in the petroleum sector; and the inclusion of occupational health and safety provisions in regulations to ensure proper working conditions for petroleum sector workers.

It also recommended the re-establishment of a Petroleum Safety Inspectorate, as a department in the Ministry, to regulate, oversee and monitor the petroleum sector.

“To date, we have completed development of Jamaica’s national petroleum code, which establishes the standards and codes, in relation to all petroleum activities, which are already in place. The regulations would give the standards and code enforcement powers. Additionally, we have completed the necessary public consultation on the regulations. There is still a process to collate all the comments and see which ones can be taken on board,” Williams said.

The head of the Petroleum Corporation of Jamaica (PCJ), Todd Johnson, said that there are industrial safety best-practices that should attain at any facility, especially service stations.

“Where there is a gas leak, the common industrial safety best-practices would include: shutting down primary power to the fuel dispensers to prevent fuelling; ceasing all fuelling operations at service stations; [and] instructing all vehicles that are on the service station, if their engines are on, to shut them [off],” he said.

But Johnson said that if after shutting off the engines, and there is a heat source from that, the cars are to be put in neutral, then physically pushed off the premises. In addition, another precaution is to barricade the dispensing area to prevent access of foot and vehicular traffic to the premises.