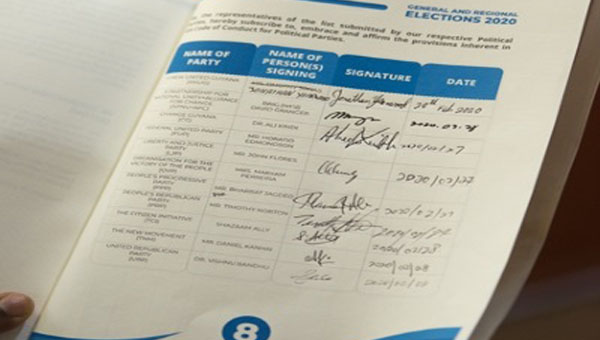 GEORGETOWN, Guyana, February 28, 2020 (CMC) – Today, some of the 11 political parties, contesting Monday’s regional and general election, signed a Code of Conduct, drawn up by the Guyana Elections Commission (GECOM), pledging to maintain peace and public order and compliance with electoral laws.

GECOM Chair, retired Justice Claudette Singh, acknowledged that late notice may have resulted in some of the political parties being unable to sign the accord, but indicated that the absence of any party from the signing, is no indication that they would not adhere to the Code of Conduct.

“It is indeed refreshing to note, that many of our political parties have readily consented to abide by the principles, embodied in the code, by their presence, here, this afternoon. I would urge all parties to adopt a responsible approach, to ensure that, in the days leading to elections, during the campaigns, that they be free of hate speeches, incitement and provocation, which may, inevitably, invoke emotions in an already-charged atmosphere,” the Chair said.

Among those signing the code were President, David Granger, and his challenger for the position, Irfaan Ali.

Granger, as he did in 2015, is leading the ruling coalition — A Partnership for National Unity (APNU)/the Alliance For Change (AFC) — into the polls, while Ali is the Presidential Candidate for the main opposition, the People’s Progressive Party/Civic (PPP/C), which lost the last general election — by one seat.

The other signatories to the Code of Conduct were: A New United Guyana, Change Guyana, Liberty and Justice Party, Peoples Republican Party, The Citizenship Initiative, The New Movement and United Republican Party.

The Federal United Party and Organization for the Victory of The People did not sign the Code of Conduct that affirms that the political parties understand, commit and pledge to ensure peace and public order, have the freedom to campaign and comply with electoral laws and regulations, which are essential to the conduct of free, fair and credible elections.

Parties specifically commit to non-violent relations between its candidates, agents, members and supporters and those of other political parties.

Representatives of some of the local, regional and international observer teams witnessed the signing ceremony.

Meanwhile, Chief Elections Officer, Keith Lowenfield, confirmed that 43 soldiers and police officers, at Eteringbang, who were unable to vote, last Friday, when members of the security forces cast their ballots, will do so, as the matter has now been addressed.