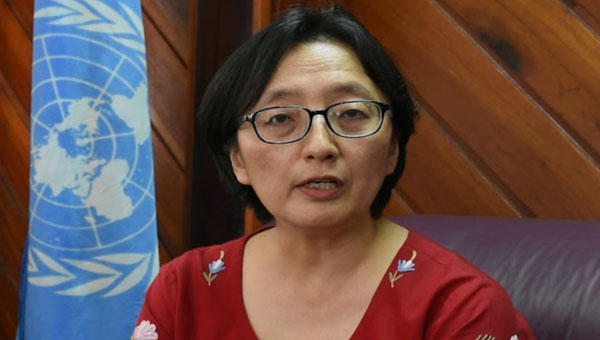 The United Nations Country Representative in Guyana, Mikiko Tanaka, has called on the country's political leaders to accept the results of the elections.

Voters go to the polls, on Monday, to elect a new government, and while 11 political parties have nominated candidates for the regional and general elections, political observers say the contest is a straight fight, between the ruling coalition government — A Partnership for National Unity (APNU)/Alliance For Change (AFC) — and the main opposition, People’s Progressive Party/Civic (PPP/C).

“We are…closely monitoring political, security and human rights developments in the electoral context,” Tanaka said, noting that Guyana has a unique opportunity to establish a more prosperous and sustainable development path for all its citizens, and ensuring credible and peaceful elections is central to the country’s future development.

She urged all stakeholders to demonstrate commitment to democratic principles, processes and institutions, and not lose sight of the fact that legitimate elections represent the voice and will of the people.

“I encourage all stakeholders to ensure an enabling environment for the exercise of the rights to freedom of expression, peaceful assembly, and association. Promoting a peaceful and calm atmosphere, in respect of the rule of law, is key for a credible poll. This includes respectful exchanges of partisan ideas, without resorting to hateful and inflammatory speech, through to the end of the electoral process,” she added.

She also called on the political leaders to accept the results of the elections that are being monitored by several local, regional and international organisations, including the Caribbean Community (CARICOM), the Organisation of American States, the Commonwealth and the US-based Carter Centre.

“The dignified acceptance of the results by political parties will help to build confidence and trust in state institutions and create a foundation for cooperation beyond the election,” she said in the statement.

In the statement, she said respect for human rights is an essential element for the holding of peaceful and inclusive elections and that all Guyanese including men, women, persons with disabilities, as well as members of the Lesbian, Gays, Bi-sexual, Transgender and Intersex (LGBTI) community and other minorities, should be able to exercise their franchise.

The diplomat said that the UN system is committed to supporting Guyana in implementing the 2030 Agenda for Sustainable Development, which outlines 17 goals. The salient message of SDG (sustainable development goal) 16 is that there can be no sustainable development without stable, secure and inclusive societies, with respect for human rights, rule of law and effective governance.

SDG 16 calls for further strengthening of institutions of governance, more inclusive and participatory processes, as well as renewed commitment to end all forms of violence and insecurity, including gender-based violence.

The Guyana Elections Commission (GECOM) hopes to declare a winner by March 7. However under the prevailing laws, it has up to 15 days to declare the winner of the poll.