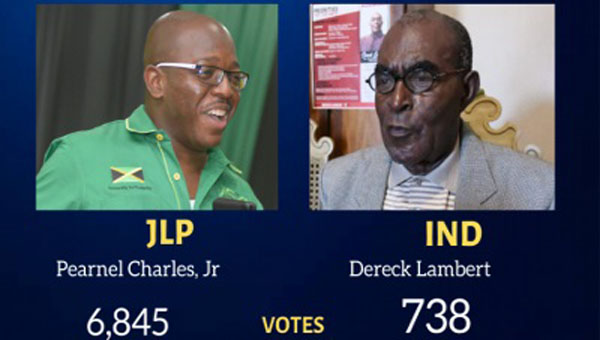 Courtesy of the Jamaica Gleaner.

CLARENDON, Jamaica, March 3, 2020 (CMC) – Prime Minister, Andrew Holness, said he was confident that the newly-elected parliamentary representative for South East Clarendon, Pearnel Charles Jr., “will deliver”, as the ruling Jamaica Labour Party (JLP) maintained its three-seat majority in the Parliament, with an overwhelming victory in the by-election, yesterday.

Charles Jr. easily defeated independent candidate, Dereck Lambert, by a whopping 6,845 to 738 votes, in a contest that was boycotted by the main opposition People’s National Party (PNP).

The PNP had stayed away from the by-election, occasioned by the immediate resignation, last month, of Rudyard Spencer, saying the poll was not “occasioned by any personal or national emergency, but by the political exigencies of the Jamaica Labour Party, to settle the political wrangling between Senators, Pearnel Charles Jr. and Robert Morgan”.

In a message on his Twitter account, Prime Minister Holness described the victory as “resounding”, saying that “Pearnel Charles Jr. is the new Member of Parliament, and we are confident that he will deliver for the people of this constituency”.

Director of Elections, Glasspole Brown, expressed satisfaction with the conduct of the by-election. The official count of the ballots will take place, later today, at the Vere Technical High School.

The Electoral Office of Jamaica ( EOJ) said 7,583 voters, or 18.3 percent of the 41,308 registered electors in the constituency, turned out to vote.