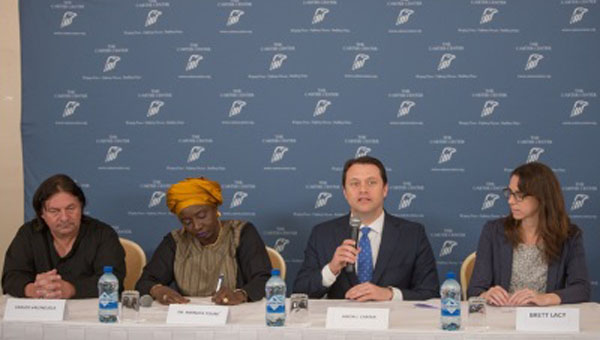 “The Carter Centre commends the people of Guyana for their participation in the March 2nd election, and we would like to encourage all Guyanese to remain patient and peaceful, as GECOM finalizes the results,” it said in a statement.

Returning officers have released preliminary results for the regional elections, in at least seven of the 10 regions, but GECOM has made no official statement on results, to date.

“I do believe that everybody should refrain from declaring any results. There is, by the Constitution, a body that is there for that. It is called the Guyanese (Guyana) Elections Commission,” said Aminata Touré, the former Senegal Prime Minister, who is one of the two leaders of the Carter Centre Mission, here.

“By law that is the only body that, by law, should be declaring results, so we appeal to those political parties, and their leaders, to refrain from declaring results, if they want to do justice and support democracy in Guyana,” she told a news conference.

The Carter Centre Observer team confirmed reports, of a meeting with President David Granger, who is leading the ruling coalition — A Partnership for National Unity (APNU) and the Alliance For Change (AFC) — Irfaan Ali, the presidential candidate of the main opposition People’s Progressive Party/Civic (PPP/C), since the polls closed, on Monday evening.

It said that it urged both leaders to accept the results of the elections.

“We want to streamline the process, but I don’t think anybody has a concern, so long as that transparency is maintained,” he added.

Touré, said there was always a wager, between timeliness and the transparency of the process, so that there can be trust in the system.

“I would always go for making sure that all the stakeholders agree with the result, even if it takes a bit of time,” she said.

In its preliminary report, the Centre, which had 41 observers here, said that it had visited 220 of the estimated 2,339 polling places across the country, describing the procedures on Monday, as largely positive, with minor inadequacies.

The report noted that there were representatives of some political parties near the polling stations with campaign material.

In its report, the Carter Centre is recommending that political parties should revisit the structure of GECOM and how Commissioners are chosen.