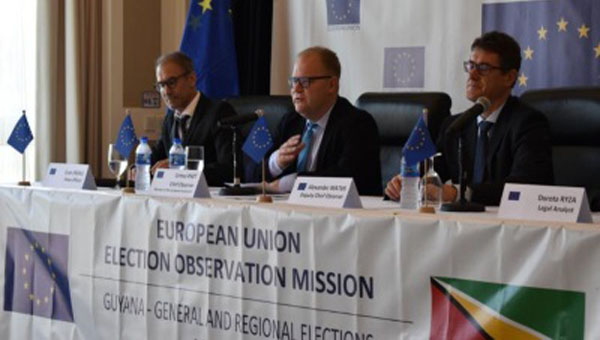 GEORGETOWN, Guyana, March 4, 2020 (CMC) – The European Union Observer Mission says Monday’s regional and general elections, here, took place in a “deeply polarised environment”, and that a lack of transparency in the administration of the elections characterised the pre-election context.

Head of the EU Observer Mission, Urmas Paet, told a news conference, today, that there was no transparency from political parties, especially the two major political parties about the financiers of their campaigns.

Delivering the team’s preliminary report on the elections, Paet said “the legal framework does not provide for transparency and accountability in a political party and campaign finance”.

“Parties and candidates raise funds from private sources in-country and abroad, without any limitations regarding the sources or amount of donation, and with limited obligations to disclose sources of funding or report on expenditure.

“There are a few sentences in the legislation, but I’m not sure that they are followed, so that, basically, nobody knows who finances election campaigns, what is the reason why they finance these electoral campaigns and also what would be a politically possible outcome of this kind of financing of politics and finances of political campaigns.”

Paet told reporters that the campaign demonstrated that both the governing coalition, A Partnership for National Unity and the Alliance for Change (APNU+AFC), and the main opposition People’s Progressive Party/Civic (PPP/C) had significant funds to their disposal “unmatched by any other party”.

He said with “the implicit consent of the main contenders”, the Guyana Elections Commission (GECOM) does not “assume its oversight responsibility to monitor campaign finance”.

But the EU official also acknowledged that the elections were competitive, contestants could campaign freely, and election day was well managed by the election administration.

The EU said that voting on Monday was well managed and the electors were able to exercise their votes freely.

The EU observers assessed the process very positively, although some procedural safeguards were not consistently applied.

“Counting was conducted in a transparent manner, but reconciliation procedures were not always followed. In the absence of clear, written instructions, the mission noted inconsistencies in the results transmission and tabulation process,” the EU said in its preliminary findings.

It said transparency of the election administration was undermined by the lack of access to GECOM’s key decisions, instructions and essential electoral data.

Lack of institutional engagement with the media and stakeholders contributed to most parties being left out, and the general public being under-informed. It is essential that GECOM finalises the tabulation in a transparent and timely manner, the Mission stated.

The EU Election Observation Mission said it would remain in the country until the electoral process is completed, and will issue a final report, within two to three months, containing recommendations for improving future electoral processes in Guyana.