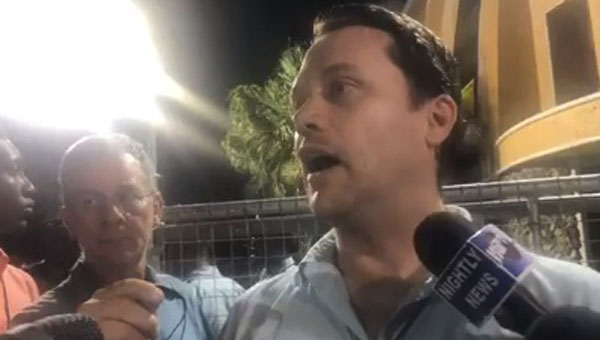 GEORGETOWN, Guyana, March 5, 2020 (CMC) – International observer teams called on the Guyana Elections Commission (GECOM) to ensure transparency in the counting of the ballots in Region Four, as riot police surrounded the headquarters of the Commission, tonight, as Guyanese voters still await the results of Monday’s regional and general elections.

Former Barbados Prime Minister, Owen Arthur, who is heading the Commonwealth Observer team, here, said that “it is the clear view of the Group that the tabulation of the final election results has not yet been completed and verified, according to the established procedures and relevant legal and statutory provisions”.

“We strongly urge the Guyana Elections Commission, and all parties involved, to ensure the process properly follows the legal steps, dictated by the laws of Guyana, and is in line with the country’s international commitments,” he added.

Various media houses have been publishing results, claiming to have been released by GECOM, showing that the ruling coalition — A Partnership for National Unity (APNU) and the Alliance for Change (APNU+AFC) — had won Region Four, by a commanding lead over the main opposition People’s Progressive Party/Civic (PPP/C) and, in effect, had regained power in this Caribbean Community (CARICOM) country.

But Jason Carter, one of the co-Leaders of the Carter Centre Observer Mission, told reporters, outside the GECOM headquarters, that while the Carter Centre had, over the past few days, commended GECOM for the manner in which it conducted the elections, “yesterday, and into today, the transparent verification of the results from District (Region) was stopped”.

Carter insisted that “there was no transparency in the process for announcing those results”.

“We saw that there was an agreed-upon procedure, where the parties were able to verify Statements of Poll (SOP),  and then that procedure was ended,  and these results, therefore, came as a result of as process we can’t identify,” he said, adding that because it can’t be verified, by the various legitimate stakeholders, “nobody really knows whether these results are accurate or not”.

Carter said he still believes that there is an opportunity “for this election to have credibility, we believe that there’s a number of aspects, within Guyanese law, that could be utilised in order to ensure that there is credibility, and we urge the people of Guyana, and the different political parties and GECOM to abide by those rules”.

He said that these include a request for a recount and that GECOM would have to “cooperate in receiving that request and pursuing that, by the rule of law”.

In a joint statement, the representatives of the United States, Canada and the European Union Delegation said they were questioning the “credibility of the Region Four results, published by GECOM today”.

“We urge the Guyana Elections Commission and all relevant actors, to expeditiously complete the tabulation, on the basis of the statements of poll. We call on all Guyanese to remain calm and patient, and for all leaders to exercise responsibility and restraint,” the diplomats said in the statement.

Lawyers, associated with the PPP/C, have secured an injunction against GECOM; the Chief Election Officer, Keith Lowenfield; and the Returning Officer for Region Four, Clairmont Mingo, from declaring the election results, unless done in compliance with the law.

The ex-parte injunction was issued by Justice Navindra Singh and states the respondents are restrained from “declaring the total number of valid votes electors for each List of Candidates recorded”…at the elections unless the Returning Officer for Region Four and/or CEO, Keith Lowenfield, comply with, and ensure compliance with, the process set out under Section 84 of the Representation of the People Act.

Meanwhile, the government is claiming a misunderstanding that led to reports that Foreign Affairs Minister, Dr. Karen Cummings, had threatened to take away the accreditation of the observer teams.

“It has been brought to our attention that comments, made by the Minister of Foreign Affairs, Dr. Karen Cummings, to Members of the International Observer Missions are being shared on social media.

“We wish to make it clear that the government of Guyana welcomes the presence of all Observer Missions and are open to their recommendations. We regret any misunderstanding the comments of the Foreign Affairs Minister may have caused.

At this time, we are all committed to allowing the Guyana Elections Commission (GECOM) to do its work, without any interference,” the government statement noted.