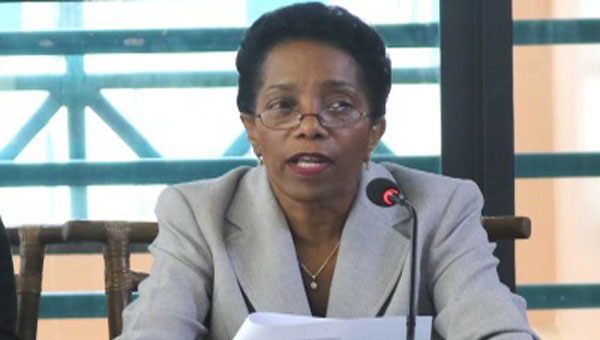 GEORGETOWN, Guyana, March 6, 2020 (CMC) – The Caribbean Community (CARICOM) Election Observation Mission said, today, it is imperative for the Returning Officer in Region Four be allowed “to carry out his functions, independent of any influence”.

“The CARICOM Election Observation Mission accepts that the tabulation process, which commenced, on Wednesday, March 4, 2020, using the Statements of Poll and which was in accord with the legislative provisions of Section 84 of the Representation of the People Act Cap 1.03 Revised Edition of the Laws of Guyana, was interrupted and remains incomplete,” said Cynthia Combie Martyr, the Head of the CARICOM Observer Mission.

She said, further, it is evident that the transparent tabulation of results for Region Four “must be resumed under the independent control of the Returning Officer, as these scores are necessary and critical, in order to determine the outcome of the national poll”.

“Like in other regions in Guyana, it is imperative that the Returning Officer be allowed to carry out his functions, independent of any influence or directive from the Guyana Elections Commission (GECOM) Secretariat,” she said.

Combie Martyr said “until this occurs, the outcome of the elections of March 2, 2020, cannot be reliably proclaimed”.

On Thursday, GECOM released to the media, results for Region Four, showing that the ruling coalition — A Partnership for National Unity plus the Alliance for Change (APNU+AFC) — defeating the PPP/C by more than 59,000 votes and securing another term in office.

Earlier, the international observer teams called for the resumption of the tabulations of results in Region Four.

In a joint statement, the international observer missions, from the Commonwealth, the Organization of American States (OAS), the European Union, and The Carter Center said that “the tabulation of results for the election in Region 4 was interrupted and remains incomplete”.

“The law requires that tabulation must be conducted in the presence of party agents and observers. Until this transparent process takes place, the counting of votes, recorded for Region 4, remains incomplete,” they said in a joint statement.

“The transparent tabulation of results for Region 4 must be resumed, in order to proceed to the establishment of national results,” they said, further adding “a calm and conducive environment must be provided by the police. We urge all political parties to adhere to the codes of conduct, signed by them.”

Combie Martyr said that the CARICOM Election Observation Mission “in this regard…supports the joint statement”, by the international groups, “and urges GECOM to proceed with the establishment of the results for Region Four, in accordance with the law”.

“The Mission appeals to the political parties and the people of the Cooperative Republic of Guyana to co-operate with the process, by honouring the subscribed codes of conduct,” Combie Martyr added.

Meanwhile the APNU+AFC coalition is urging “all Guyanese to respect the will of the people as exercised in the general and regional election.

“Further the APNU+AFC coalition calls on all Guyanese to conduct themselves in a peaceful and law-abiding manner, as they go about their daily activities. APNU+AFC implores citizens to remain calm and not to engage in any act whatsoever, to disrupt national life or cause any strife or inconvenience.”

The coalition said that it wanted to commend “the hundreds of thousands of Guyanese who exercised their right to vote on Monday, and who have remained calm and peaceful, as we all await the final declaration of results by the Guyana Elections Commission”.