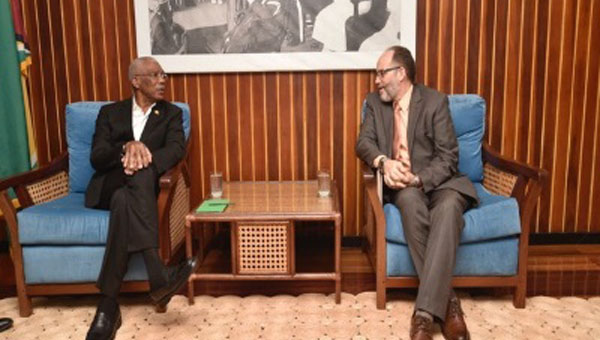 GEORGETOWN, Guyana, March 6, 2020 (CMC) – International observer teams, today, called for the resumption of the tabulations of results in Region Four, as Guyana remains in limbo, regarding the official outcome of Monday’s regional and general elections.

The international observer missions, from the Commonwealth, the Organization of American States (OAS), the European Union (EU), and The Carter Center, in a joint statement, said that “the tabulation of results for the election in Region 4 was interrupted and remains incomplete”.

“The law requires that tabulation must be conducted in the presence of party agents and observers. Until this transparent process takes place, the counting of votes, recorded for Region 4, remains incomplete,” they said in a joint statement.

“The transparent tabulation of results for Region 4 must be resumed, in order to proceed to the establishment of national results,” they said, further, adding “a calm and conducive environment must be provided by the police. We urge all political parties to adhere to the codes of conduct, signed by them”.

“The Guyana Elections Commission (GECOM), including the Chairperson, the commissioners, the Chief Election Officer, the returning officer and deputy returning officers in Region 4, must be available and committed to establish the results for Region 4, in accordance with the law. Until this occurs, the result of these elections cannot be credibly declared,” the group said.

Yesterday, GECOM released to the media, results for Region Four, and if certified, would result in the ruling coalition — A Partnership for National Unity plus the Alliance for Change (APNU+AFC) — defeating the main opposition People’s Progressive Party Civic (PPP/C) by more than 59,000 votes.

Meanwhile, President David Granger held talks, today, with the Secretary General of the Caribbean Community (CARICOM), Irwin La Rocque, and, according to a statement, issued afterwards, “President Granger, during his briefing, reiterated that the March 2, 2020 General and Regional Elections were orderly, and in full compliance with the law and the Constitution”.

The statement said that Granger, who also met with an OAS delegation, “reminded that GECOM is a constitutional body and it is unlawful for the Executive to interfere in the operations of the Guyana Elections Commission (GECOM)”.

“The President said also that it is not the role of the Executive to interfere in the work of the Commission. The President has not acted unlawfully,” the statement said, quoting Granger as saying “we are awaiting the final declaration from GECOM”.

Earlier, the 15-member regional integration grouping, of which Guyana is a member, had issued a statement saying it is “concerned about the allegations, being made about the Guyana elections”, and called on the Guyana Elections Commission “to ensure that all legal and procedural processes are fully complied with”.

“The Community calls on the Guyana Elections Commission (GECOM) to ensure that all legal and procedural processes are faithfully complied with, in respect of the vote count and the declaration of results, to ensure that the outcome of the polls expresses the will of the people of Guyana. We call on all parties and Guyanese to remain calm, while these issues are resolved,” the statement added.