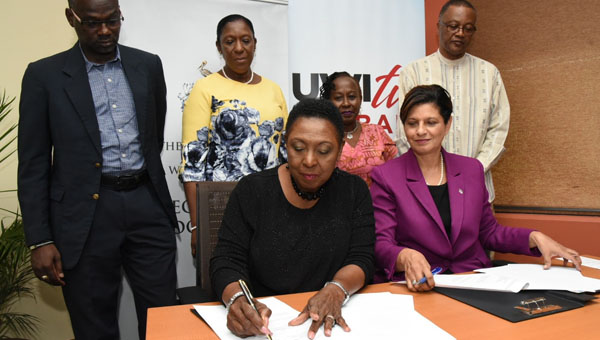 KINGSTON, Jamaica March 6, 2020 — The government will be partnering with the University of the West Indies (UWI), Open Campus, over the next three years, to provide training and research on sexual harassment in the workplace and related matters.

Specifically, the collaboration is between the Bureau of Gender Affairs (BGA), under the Ministry of Culture, Gender, Entertainment and Sport, and the Hugh Shearer Labour Studies Institute.

Both parties signed a Memorandum of Understanding (MoU) to formalise this partnership during a ceremony at the UWI Regional Headquarters on February 28.

The emphasis will be on providing support to combat the stigma of sexual harassment, through research and the areas of training identified. It is expected to contribute to an appreciation, among public sector workers, of the importance of promoting an environment, free of sexual harassment, in which all categories of workers are treated with respect and dignity.

Minister of Culture, Gender, Entertainment and Sport, Olivia Grange, who participated in the signing, said the MOU has been entered into, at an opportune time, in light of “the increasing incidents of violence and abuse of our women”.

She noted that through the MoU, the intent is to explore the impact on productivity of sexual harassment and the implications for workplace competitiveness.

She pointed out that the Ministry’s collaboration with the UWI Open Campus will assist in defining the scope of the research agenda, “and to better prepare us for the challenges in combatting sexual harassment in the workplace”.

Grange said an important benefit from this collaboration, is in the area of training, which will focus on prevention of sexual harassment.

“In that regard, we must create a vision of a new Jamaica, where respect, tolerance and dignity and a high self-esteem are seen as the norm for workplace behaviours, and that organisations take the time and make the effort to offer mentorship and specialised training for persons, who have been socialised to show disrespect for women,” she said.

In her remarks, Pro Vice-Chancellor and Principal, UWI Open Campus, Dr. Luz Longsworth, said through ongoing training, the Institute has been working to address the issue of sexual harassment.

“Over the last year or two, the Institute has been at the forefront of training and sensitisation in over 30 organisations in Jamaica and the region, in both the public and private sectors, and they have dealt with not only sexual harassment, but also workplace-bullying, and in guiding policy development and implementation in the workforce,” she explained.

Dr. Longsworth argued that knowing what is happening in the workplace is important to ensuring the improvement of labour relations in Jamaica.

She noted that Jamaica’s “own culturally-nuanced approach to gender interactions in the workplace, needs to be explored. They need to be scrutinised and, most importantly, they need to be researched, in order to guide our policy development”.

“We know that there is a dearth of that type of research in the Caribbean, which will guide policy and practice in some of our major industries,” she said.

She noted, for instance, that research needs to be done on the local hospitality industry, pointing to research from the United Kingdom (UK), which revealed that nine out of every 10 workers in the sector have experienced some form of sexual harassment.

Dr. Longsworth also pointed to the need to explore the situation of domestic workers, as well as call centre employees.

She said that sexual harassment is not only about human rights and social justice, but it makes good business sense for organisations to invest in eliminating sexual harassment, citing research in the United States (US), which has shown that the effects of sexual harassment on productivity and health, as well as the cost of litigation, can go up to US$22,000 per employee in the company that is affected.