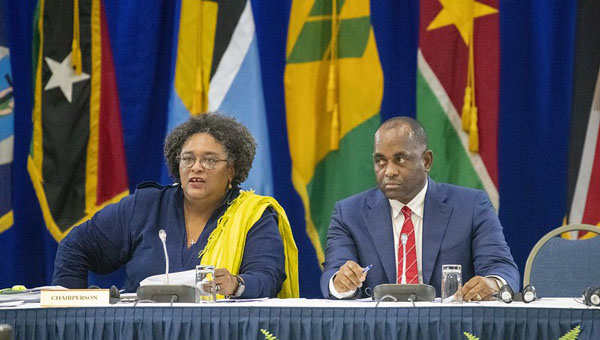 GEORGETOWN, Guyana, March 11, 2020 (CMC) – A four-member Caribbean Community (CARICOM) delegation, headed by its Chair, Barbados Prime Minister, Mia Amor Mottley, will arrive, here, later today, in its latest bid to find a solution to the stalemate that has prevented Guyanese voters from knowing the outcome of the March 2 regional and general election.

A statement, issued by the Guyana-based CARICOM Secretariat, said Mottley will be accompanied by Prime Ministers, Roosevelt Skerrit of Dominica, Ralph Gonsalves of St. Vincent and the Grenadines and Keith Mitchell of Grenada on the two-day visit.

“In an effort to ease tension in the country and assist in arriving at a resolution to the impasse that resulted from last Monday’s general elections, the delegation will meet with the leadership of all parties that contested the poll.

“Additionally, the CARICOM Heads will meet with representatives of the Commonwealth, Organisation of American States (OAS), European Union (EU) and the Carter Centre observer missions that were in the country to monitor the conduct of the elections,” the Secretariat said.

The visit coincides with the planned ruling, at 2pm today, by Acting Chief Justice, Roxane George-Wiltshire, who will decide, whether or not, the injunction — granted to a supporter of the main opposition People’s Progressive Party/Civic (PPP/C) to block the Guyana Elections Commission (GECOM) from declaring the results for last Monday’s elections — was justified, on the grounds that the votes declared for Region Four were not completely verified.

Holladar has sought a number of remedies, including an order from the High Court that the declaration of the Region Four votes, by the Returning Officer, is in breach of the provisions of the Representation of the People’s Act and, as such, it is unconstitutional,

He also wants a declaration that GECOM cannot legally, or constitutionally, declare the results of the regional and general elections, unless and until, the Returning Officer or the Deputy Returning Officer for Region Four, complies with the process, set out in Section 84 of the Representation of the People’s Act.