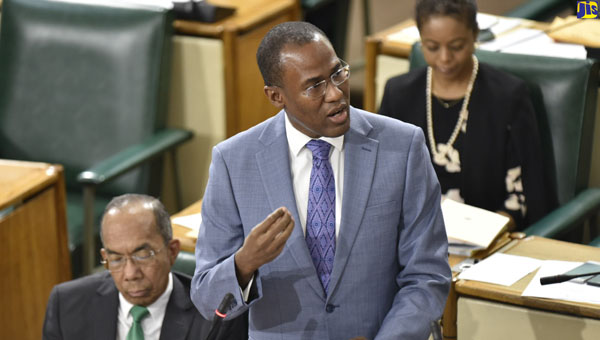 Minister of Finance and the Public Service, Dr. Nigel Clarke, opens the 2020/21 Budget debate in the House of Representatives, on March 10. At left is National Security Minister, Dr. Horace Chang, while Attorney General, Marlene Malahoo Forte, is in the background. Photo credit: Donald De La Haye/JIS.

KINGSTON, Jamaica March 11, 2020 — Reduction of the General Consumption Tax (GCT) rate, from 16.5 percent to 15 percent is among $18 million in tax cuts, announced by the government, yesterday.

The GCT cut, effective April 1, 2020, will result in potential revenue loss to the government of $13.96 billion; and the objective is to stimulate economic activity and to continue the reform of the tax system, towards greater levels of equity, efficiency and simplicity, said Minister of Finance and the Public Service, Dr. Nigel Clarke.

“A cut in the rate of GCT will leave more disposable income in the economy, which will boost economic activity, which would benefit all households and firms,” Finance Minister Clarke said, as he opened the 2020/21 budget debate in the House of Representatives.

The last adjustment to the standard rate of GCT was in June 2012, when it was reduced from 17.5 percent to 16.5 percent.

The proposed reduction is expected to result in increased compliance by tax-payers, while incentivising all sectors, through lower upfront costs and increased cash flow, which will serve to encourage growth in the economy.

Dr. Clarke also announced a reduction in the assets tax rate, from 0.250 percent to 0.125 percent, effective in the next assessment year. This will result in a potential revenue loss of $3.02 billion.

“The responsiveness of the financial institutions to this reduction, in terms of expanding their asset base, especially by lowering further interest rates and supporting expansion of the domestic economic activity, will determine how quickly we reduce any further,” he added.

Also announced was a new income tax credit, of $375,000 for companies (regulated and unregulated) with annual sales/revenue, less than or equal to, $500 million.

This is in addition to the employment tax credit, available to unregulated companies, and must be utilised within the year given, and can neither be carried forward nor result in a refund.

This measure is expected to result in potential revenue loss of $1 billion and is effective for the year of assessment 2020.