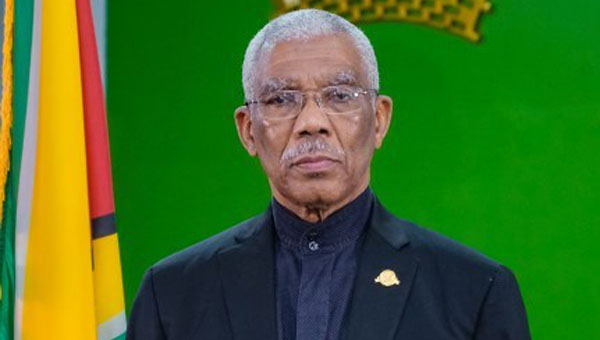 The Ministry of the Presidency clarified that the eight guards, who tested positive for COVID-19, are "not responsible for the close protection of President, David Granger”. Photo credit: DPI.

GEORGETOWN, Guyana, March 12, 2020 (CMC) – President, David Granger, in a radio and television broadcast, last night, confirmed that a woman, who had been taken to the Georgetown Public Health Corporation (GPHC), on Tuesday night, had died of the virus that has killed more than 4, 000 people, across more than 110 countries, since it was first detected in China, last December.

“Guyanese, it is my sad duty to announce Guyana confirmed its first imported case of (the) Coronavirus Disease 2019 (COVID-19) in Georgetown, on Wednesday 11th March 2020. The patient has been identified as a 52-year-old Guyanese female, who had travelled from the United States of America, which has reported cases of COVID-19.

“She arrived in the country on 5th March, presented to the public health system on 10th March, and was found to have uncontrolled diabetes and hypertension. She subsequently died at the Georgetown Public Hospital Corporation at 08:00 hours on 11th March,” Granger said.

He explained that health professionals sought to conduct tests for COVID-19, based on the patient’s travel history, and that a clinical sample was collected and sent to the National Reference Laboratory, where laboratory tests confirmed the diagnosis.

“The patient’s infection is classified as an imported case. Measures are being taken to prevent the risk of community spread,” Granger said, adding that the measures include: the dispatch of a health team to the home of the deceased for assessment; initiation of public health prevention measures; and the identification and contact-tracing for all possibly-exposed persons.

He said that health officials would be meeting with the staff of the hospital, and there would be the implementation of necessary interventions.

Granger said that screening remains in place, for those persons arriving from high-risk countries, like Jamaica, the Dominican Republic, Brazil, French Guiana, Panama, St. Vincent and Grenadines and the United States, as well as travel bans for persons originating from China, Italy, South Korea, Singapore, Japan, Thailand, Malaysia and Iran.

“I advise further, that public gatherings be discouraged (and) non-essential travel be discouraged,” he said, adding that competent agencies continue to patrol irregular border crossings, and there has been enhanced sensitization of key personnel at all air and seaports.

Granger said that the Ministry of Public Health has designated three quarantine facilities and others will be identified.

He disclosed that the Ministry has also developed the local capacity to test for the COVID-19, as a result of training, provided by the Pan-American Health Organization (PAHO).

He outlined a number other measures being undertaken to prevent any further spread of the virus, adding “these efforts are supported by a communications campaign, to keep the population updated on the virus and its impacts and oversight provided by the Health Emergency Operations Centre. The National Emergency Operations Centre (EOC) will be activated to provide sector wide support”.

Granger said health authorities are also urging the public to adhere to infection prevention and control measures, particularly to: maintain a distance, of at least one metre, from persons, who are coughing or sneezing; perform hand hygiene, frequently, by washing hands thoroughly, with soap and water, or using a hand sanitizer if hands are not visibly soiled; cover mouths and noses with a tissue, when coughing or sneezing, and then discarding it; and resist the habit to touch the face.

“I use this opportunity to appeal to the public to remain calm and to implement all the advisories, relating to personal hygiene, social distancing and overall infection prevention and control,” Granger added.