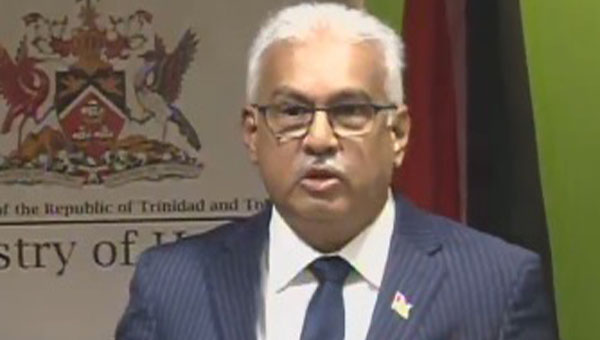 PORT OF SPAIN, Trinidad and Tobago, March 13, 2020 (CMC) – Trinidad and Tobago confirmed, yesterday, it had recorded its first “importer case” of the coronavirus (COVID-19), after a resident, who had returned from Switzerland, on Monday, tested positive.

Health Minister, Terrence Deyalsingh, told a hastily-arranged news conference that the family of the 52-year-year-old individual, who “resides in Trinidad and Tobago”, had been placed in isolation, since Wednesday.

“It is a mild case, arrangements are being made to have him transported, from his home to the Caura hospital,” the Health Minister informed.

Deyalsingh said that the confirmation had come from the Caribbean Public Health Agency (CARPHA), and National Security Minister, Stuart Young, told reporters that citizens should not panic, and follow the advice of public health authorities.

“What we are asking people to do, is to be self-cautious,” he said, advising them not to expose themselves to mass gatherings.

Public health authorities, here, said that tracing is taking place, with regards to contacts the unidentified individual would have made, and reiterated that overseas travel should only be absolutely-necessity or an emergency.

Trinidad and Tobago now joins Jamaica, St. Vincent and the Grenadines and Guyana, as the only Caribbean Community (CARICOM) countries to have recorded positive cases of the virus, which has killed more than 4,200 people in more than 110 countries, since it was first detected in China in December, last year.