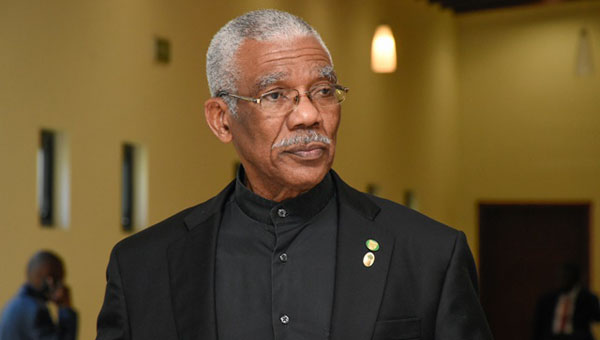 GEORGETOWN, Guyana, March 16, 2020 (CMC) – President David Granger has asked the Chair of the Caribbean Community (CARICOM), Barbados Prime Minister Mia Mottley, to ensure that the CARICOM Initiative operates, within the legal framework of the Constitution of Guyana and respect the role of the Elections Commission and the rulings of the Supreme Court.

The president made the proposal, during a teleconference, to Mottley, yesterday.

The CARICOM initiative involved dispatching a high-level independent team to Guyana, to overlook the recount of votes, in all 10 electoral regions, following the recent general and regional election .

“It will not act independently. I urged, also, that the Commission be allowed to craft the Terms of Reference, governing the relationship between the CARICOM initiative and the Elections Commission,” the president announced, in an address to the nation, yesterday.

According to Granger, his administration is looking forward to a total national recount, being completed, as soon as possible, under the auspices of the Elections Commission.

The president also sought to assure the country that he did not interfere in the electoral process.

“I urge you to be patient, as we comply with the rulings of the Court and the decisions of the Commission. I advise you to avoid provocation, by certain lawless elements, who committed acts of violence against innocent school children, nurses and police officers,” Granger siad.

Government-appointed Commissioners, Vincent Alexander and Charles Corbin, also made it clear that the electoral process for Region Four remains in the hands of the Returning Officer, and the President and the Opposition Leader have no statutory functions over that officer or the Commission.

The Chair of GECOM, Retired Justice Claudette Singh, conducted a meeting, yesterday afternoon, of the full Commission to examine the issue.

As part of the process, the Commission has transported containers with all the ballot boxes to its central location, at its headquarters in Georgetown. The actual counting of the ballots is expected to commence this afternoon.