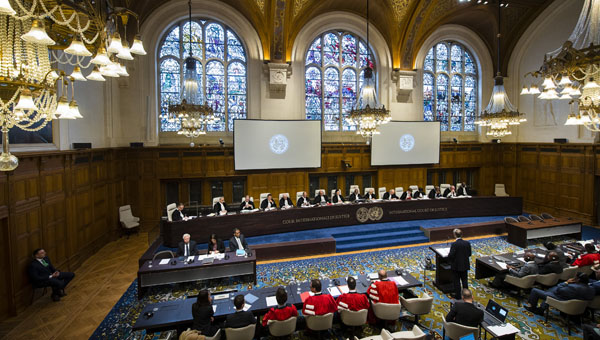 GEORGETOWN, Guyana, March 17, 2020 (CMC) – The International Court of Justice (ICJ) has postponed the oral proceedings in the border dispute, between Guyana and Venezuela, that was due to begin on March 23, the Ministry of Foreign Affairs has said.

In a brief statement, the Foreign Affairs Ministry said that it had received communication, from the Hague-based Court, that the postponement is due “to the current, worldwide, health crisis”.

Several countries have either closed their borders or have imposed severe restrictions, as the world grapples with the coronavirus (COVID-19) pandemic that has killed more than 7,900 people and affected hundreds of thousands, since it was first detected in China in December, last year. There is no known vaccine for the virus.

In the statement, the Ministry of Foreign Affairs said that the ICJ has given an undertaken “that it will give a decision on a new date, in due time”.

The hearing was originally scheduled for March 23-27 and would have determined whether the Court has jurisdiction over the case, filed by Guyana on March 29, 2018, to obtain a final and binding judgment that the 1899 Arbitral Award, which established the location of the land boundary, between then-British Guiana and Venezuela, remains valid and binding, and that Guyana’s Essequibo region belongs to Guyana, and not Venezuela.

Guyana brought its case to the Court, following the decision by the Secretary-General of the United Nations, in January 2018, that the controversy, between Guyana and Venezuela, should be decided by the World Court.

In taking his decision, the Secretary-General was exercising the power, vested in him, in the 1966 Geneva Agreement between Guyana, Venezuela and the United Kingdom, to decide how the controversy should be settled.

While Venezuela has claimed, in a letter to the Court, that the Secretary-General exceeded his authority, under the Geneva Agreement, and that the Court therefore, lacks jurisdiction to adjudicate Guyana’s lawsuit, Georgetown submitted a Memorial, refuting these arguments and demonstrating that the Court has jurisdiction.

The Memorial, which was submitted on November 19, 2018, argues that there is no basis to Venezuela’s contention that the means of settlement, listed in Article 33 of the UN Charter, must be selected by the Secretary-General successively, so that the means, listed ahead of judicial settlement, have to be utilised before recourse to the Court can be chosen.

“Nothing in the text of Article IV of the Geneva Agreement, which provides a menu of options, not a predetermined sequence, supports Venezuela’s interpretation. Nor is Venezuela correct in arguing that, as it has recently asserted, the controversy must be resolved, exclusively, by friendly negotiations, a claim that is belied by the express terms of the Geneva Agreement and contemporaneous statements by the parties during its negotiation and ratification,” according to a government statement then.

The government said that Georgetown had prepared its Memorial, bearing in mind the Court’s edict, that it should be informed of all the legal and factual grounds, on which the parties rely, in the matter of its jurisdiction.

The Ministry said that Guyana’s submission therefore, sets out how the boundary with Venezuela was determined by an arbitral tribunal, constituted pursuant to a treaty concluded by Venezuela and Great Britain in 1897.

Venezuela has already indicated that it will not participate in the proceedings.