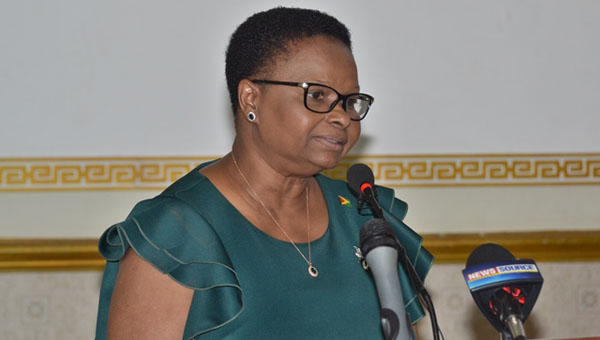 Guyana's Public Health Minister, Volda Lawrence, announced that there would be “no more self-quarantine" in the country, in response to the coronavirus threat. Photo credit: DPI.

GEORGETOWN, Guyana, March 17, 2020 (CMC) – Guyana, the only Caribbean Community (CARICOM) country to have recorded a fatal coronavirus (COVID-19) case, today, announced the closure of its international airports, as well as a ban on self-imposed quarantine, as it deals with the impact of the virus that has killed more than 6,000 people, worldwide.

Director General of the Civil Aviation Authority (CAA), Egbert Field, told a news conference that the Cheddi Jagan International Airport at Timehri, and the Eugene Correia Airport at Ogle, would be closed to all international flights for 14 days.

Field said the closures will take effect, from Wednesday at midnight, and that the only exceptions will be cargo flights, planes that have to make technical stops and special-authorized flights.

He told reporters, that while local air travel will still be allowed, they would be closely monitored, and that the CAA has been working, closely, with the Ministry of Public Health, on the issue.

In cases, where arriving passengers might have been exposed to the coronavirus, the Civil Aviation Authority has been providing the Health Ministry with the contact information for those passengers.

Field said the CAA has been conducting inspections at the airports, to ensure they have all systems in place, to address a health emergency, and that the inspections will continue during the closure.

Guyana joins Suriname in closing off the airports to international flights. Last weekend, American Airlines announced the suspension of its services to Guyana and a number of other countries, as it steps up precautions against the coronavirus.

With the closure of the two airports, Trinidad and Tobago-based Caribbean Airlines (CAL) and the Antigua and Barbuda-based regional carrier, LIAT, are expected to face major setbacks, as both companies operate multiple, daily flights into Guyana.

Today, CAL said it is aware “that there are travel restrictions into some of the destinations, to which it operates”.

“Based on this, some of the airline’s international and regional services may be consolidated, or altered. Passengers on any services, impacted by the consolidation of flights, are being re-accommodated; and the airline is contacting passengers, whose original travel plans may be affected,” it added.

Last week, a 52-year-old passenger died at the Georgetown Public Hospital Corporation (GPHC), less than 24 hours after she was admitted to the facility, suffering from symptoms, associated with the virus, for which there is no known vaccine.

Her daughter, who also travelled to Guyana, on March 12, and two other members of the family, have since all tested positive for the virus that was first detected in China last December and blamed for more than 7,900 deaths across 110 countries.

CAL has since announced that the13 crew members, who worked the two flights, have been placed in quarantine in Trinidad and Tobago.

Meanwhile, Public Health Minister, Volda Lawrence, said there would be “no more self-quarantine, and that all persons, subjected to quarantine, are now in one of four health ministry facilities, established for that purpose.

She said testing kits are available in the country at this time and that the Health Ministry is expecting a large shipment.

“These should have been already in Guyana. The delay seems to have been caused by the closure of some ports,” she added.