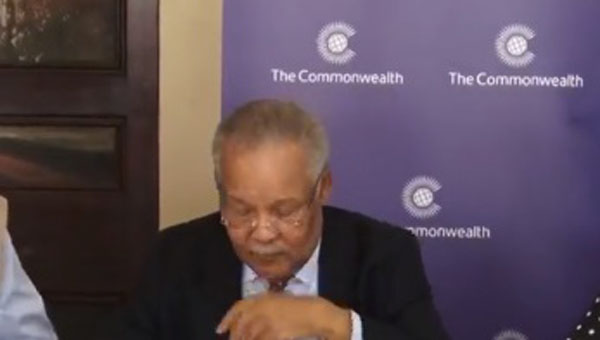 GEORGETOWN, Guyana, March 20, 2020 (CMC) – The Commonwealth Observer Group, which monitored the March 2 regional and general elections, here, said it is the clear that the tabulation processes, conducted by the Returning Officer for Region 4, were not credible, transparent and inclusive.

The Guyana Elections Commission (GECOM) is yet to officially declare the results of the polls, and the High Court is hearing an application for an injunction, today, against the Commission preventing it from carrying out a national recount of votes from the disputed election.

Justice Franklyn Holder granted an interim injunction to private citizen, Ulita Moore, and it further restrains GECOM from setting aside or varying the declarations, already made by the 10 electoral districts, with any other documents or declarations, until the hearing and determination of the judicial review of the application.

The respondents to the Court matter are the Guyana Elections Commission, the Chairman of the Commission and the Chief Elections Officer.

In its statement, the Commonwealth Observer Group, which was headed by former Barbados Prime Minister, Owen Arthur, said that the series of events that it observed, in the tabulation of Region 4 results, between 3-14 March, “are of grave concern”.

“It is the Group’s clear view that robust exchanges, between political party agents in the room, only occurred when the Guyana Elections Commission (GECOM) repeatedly halted the tabulation process,” it said, making reference also to “the unlawful declaration, made by Mr. (Clairmont) Mingo (Returning Officer) on 5 March, at about 2pm, despite the tabulation process being halted”.

It added that the “unlawful 5 March declaration of Mr. Mingo was undertaken under heavy police guard; and his departure from the tabulation centre was guided and guarded by six police officers”.

The Group also noted the “continued failure of the Returning Officer, Mr. Mingo, to comply with the 11 and 13 March orders and judgements of the Acting Chief Justice”, adding that on 13 March, the Chief Justice made it, patently clear, that actual statements of poll should be shown to entitled parties present. For the avoidance of doubt, the Acting Chief Justice demonstrated, herself, how this should be done and enquired ‘what was the difficulty in doing s’, during the contempt of court proceedings.

The report was critical of Mingo, and noted “at no point, did the leadership of the Guyana Elections Commission halt or rectify these blatant instances of disregard for the rule of law and electoral ethics, despite its vested authority to independently ensure credible elections.

“Despite the serious and persistent electoral malpractice, observed by the Group from 3-14 March, the Group welcomed the Caribbean Community (CARICOM) initiative, at the invitation of President David Granger, to deploy a high-level team to Guyana, to supervise a recount of the ballots. The Group notes, with regret, that the team has now departed Guyana, having been unable to complete their task.”

The Group said it will submit its full report to the Commonwealth Secretary-General, who will forward it to the Guyana government, GECOM, the leaders of political parties, and to all other 53 Commonwealth governments.