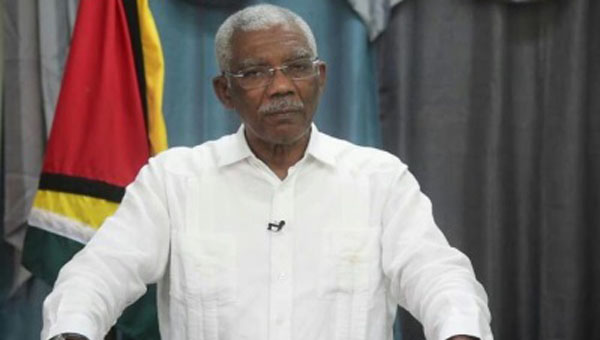 GEORGETOWN, Guyana, March 21, 2020 (CMC) – Nearly three weeks after voters cast their ballots in the country’s recent, disputed general election, President David Granger is appealing for “calm”, as well as awaiting the ruling of the Supreme Court and the final declaration of results by the Guyana Elections Commission (GECOM).

In an address to the country, last night, Granger, who led the ruling coalition — A Partnership for National Unity and the Alliance for Change (APNU-AFC) — into the March 2 polls, said that 18 days after casting ballots, “everyone anticipated that this electoral process would have been completed by this time”.

“Our democracy has allowed for interested parties to approach the Supreme Court of Judicature for judicial review of our electoral laws. This legal process is ongoing, and we must await the ruling of the Court. The electoral process is incomplete,” he said.

The main challenge to the coalition in the election, has come from the main opposition People’s Progressive Party/Civic (PPP/C), which has accused the electoral authority of wanting to rig the elections, in favour of the ruling coalition.

Yesterday, the High Court began hearing an injunction, granted to a private citizen, blocking GECOM from ordering a recount of the ballots case in all 10 Regions.

Last week, Justice Franklyn Holder granted the injunction to Ulita Moore, restraining GECOM from setting aside or varying the declarations, already made by the 10 electoral districts, with any other documents or declarations, until the hearing and determination of the judicial review of the application.

Granger, 74, said he was calling upon the members of the public to respect the role of GECOM, and to desist from attacks on the Chair, retired justice Claudette Singh, Commissioners and members of the Commission.

“The Elections Commission has the sole authority for the conduct of general and regional elections, and must be allowed to function, independent of political interference, instruction and influence.

“I have iterated, always, my commitment to respect the Constitution of the Co-operative Republic of Guyana; to protect the integrity of the Chair and members of the Elections Commission; and to obey the rulings of the Courts. I am confident that these institutions, once allowed to function without interference, will provide a solution to the present situation.”

Granger added that he has also maintained that the electoral process must be credible, adding “free and fair elections are essential to representative democracy”.

He said he was disappointed that an initiative, by the 15-member Caribbean Community (CARICOM) grouping, that would have resulted in an independent CARICOM delegation overseeing the re-count of the ballot boxes, had not materialised.

“I am disappointed that the high-level team, of five, departed Guyana this week, after efforts towards a ‘total national recount’ were stymied, following the granting of an injunction by the Supreme Court. This matter remains before the Court.

“Elections are as much about the totality of votes as about the quality of relations among citizens. I urge all Guyanese, therefore, to respect each other, as we work, together, to build a cohesive nation. Violence in any form, at any time and in any place, particularly against innocent school children, must be condemned, strongly,” he said.

“I urge all citizens to be calm and patient, as we await the ruling of the Supreme Court and the final declaration of results by the Elections Commission.”