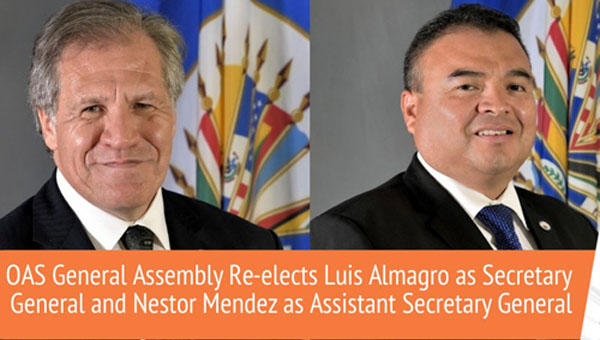 WASHINGTON, District of Columbia March 21, 2020 (CMC) – The Organisation of American States’ (OAS) General Assembly re-elected Uruguay-born Luis Almagro, as Secretary General, yesterday, for another five-year term, despite calls for a postponement of the election, in light of the global concerns, regarding the coronavirus (COVID-19).

“I will continue to dedicate all my efforts, to ensure more rights for more people, in all 34 member states,” Almargo promised, after his re-election.

“I pledge my commitment to ensuring that this organisation is optimally-positioned to assist each of its member states, in addressing the global pandemic and other crises, plaguing our world, at this time,” Mendez pledged.

Almagro received 23 of the 33 votes, cast by member states, while María Fernanda Espinosa, from Ecuador, who was nominated by two Caribbean Community (CARICOM) countries –Antigua and Barbuda and St. Vincent and the Grenadines – obtained 10 votes, and one country was absent.

Both Almagro and Mendez will fulfill their second mandate, for five years, starting May 26, 2020. Neither of them will be eligible for re-election, once they complete their second term.

United States Secretary of State, Michael Pompeo, in a congratulatory note, said “as we overcome the threat to public health, posed by COVID-19, the peoples of the Americas and the Caribbean face other challenges, such as the full restoration of democracy in Nicaragua and Venezuela; adherence to free, fair and credible electoral processes in Guyana; and holding the Cuban regime accountable for its malign activities”.

“Opportunities abound as well, including the upcoming democratic elections in Bolivia, and implementing an array of OAS programs and initiatives to boost resilience; strengthen democratic governance, human rights, and fundamental freedoms; and bolster economic competitiveness and development in the region,” he said, adding, with Almargo continuing at the helm, “I am confident about the future of the OAS and the Americas”.

The vote took place at an extraordinary OAS General Assembly meeting, despite calls by a group of countries – including Mexico and 13 of the 15 members of the Caribbean Community (CARICOM) – for it to be postponed, due to the coronavirus pandemic.

“The Organisation would send a terrible signal of irresponsibility to the world, should it proceed to hold the General Assembly on Friday, March 20, 2020,” CARICOM said in a letter, on Wednesday.

“No one would have any way of knowing how many of such persons are infected by COVID-19, even if they show no obvious symptoms of it.”

Antigua and Barbuda’s Ambassador to the OAS, Sir Ronald Sanders, said, earlier this week, “to proceed with this meeting in circumstances — where the President of the United States has said that no gatherings should be larger than 10 people, and the CDC (U.S. Centers for Disease Control and Prevention) has warned against anything over 50 people is extremely dangerous — is reckless and irresponsible”.