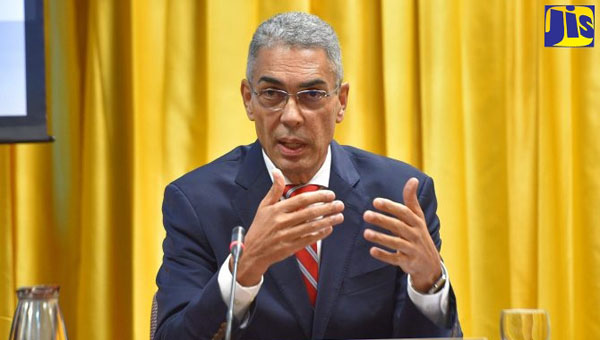 KINGSTON, Jamaica March 27, 2020 — The Bank of Jamaica (BOJ) has announced measures, aimed at maintaining order in the financial system, in light of the coronavirus (COVID-19) outbreak.

Governor, Richard Byles, who noted that Jamaica’s financial system remains sound, said the interventions are aimed at ensuring adequate access to the Jamaica dollar and foreign currency, thereby augmenting fiscal measures, already instituted by the government, in response to the pandemic.

He advised that the BOJ’s measures have resulted in $57 billion flowing into the system, within the last week.

The governor outlined details of the measures, during a virtual press conference, yesterday.

In relation to foreign currency liquidity, Byles said the BOJ will continue to support the needs of businesses, through direct sales to authorised dealers and cambios, as needed.

He advised, however, that the Bank has placed a hold on investment transactions that require foreign exchange purchases.

“This effectively raises the limit on the positions of these institutions (either long or short) to 25 percent of regulatory capital, and allows authorised dealers to provide more foreign currency to their clients,” the Governor informed.

He also assured his audience that the central bank stands ready to expand the volume of foreign currency swap-arrangements with authorised dealers, “thereby providing them with more foreign exchange liquidity”, while he informed that the stock of outstanding contracts, as at March 24, totalled US$86 million.

Regarding Jamaica dollar liquidity, Byles disclosed that the BOJ has commenced a bond-buying program.

This, he explained, will see the entity purchasing Government of Jamaica (GOJ) securities on the secondary market, from financial institutions that hold these instruments, while adding that the central bank is also prepared to redeem BOJ securities, early.

As at March 25, the nominal value of GOJ instruments, purchased by the BOJ, and the early encashment of central bank instruments, totalled $26.3 billion.

The Bank has also removed the limit on the amounts that deposit-taking institutions (DTIs) can borrow overnight, without being charged a penal rate, effective March 18.

“Liquidity support to DTIs will, therefore, be made available, on demand, at the prevailing rate of 2.5 percent, limited only by collateral,” the Governor outlined.

Meanwhile, effective yesterday (March 26), the BOJ reintroduced a longer-term lending facility that will afford DTIs access to Jamaica dollar liquidity, for up to six months.

Byles said this now enhances the institutions’ ability to secure their liquidity needs, over a longer timeline.

The Governor further indicated that the central bank will be reactivating an intermediation facility, that sees the BOJ utilising its balance sheet to facilitate transactions between holders of liquid balances and others requiring liquidity, if needed.

“This facility should support a more even distribution of liquidity in the financial system, in a context, where institutions that could not access interbank loans, because of the limits placed on them by lenders, can now do so, indirectly, with the central bank standing in the middle of the transaction,” he said.

Additionally, Byles said steps have also been taken to reactivate the Emergency Liquidity Facility that was established in 2015, upon application by any financial institution.

The Governor said against the background of the near-term outlook of significant challenges and heightened uncertainty, consequent on COVID-19, “we believe that these measures will help to facilitate the smooth functioning of the credit market”.

Byles further stated that the BOJ is optimistic that the interventions will support inflation remaining within the four percent to six percent target, over the ensuing eight quarters, in addition to augmenting the Government’s response to the pandemic.

“Our monetary policy measures, along with the Government’s fiscal stimulus, are aimed at mitigating the impact of this pandemic on the economy, and supporting a speedy recovery, once the crisis has passed,” he said.

The Governor indicated that the central bank will continue to closely monitor the impact of COVID-19 on the economy, and “stands ready to deploy additional measures”.

These, he pointed out, include a reduction of the policy rate and cash reserves requirement to ensure the continued smooth flow of liquidity to all participants in the Jamaican financial system, “and to maintain orderly conditions within the foreign exchange market”.