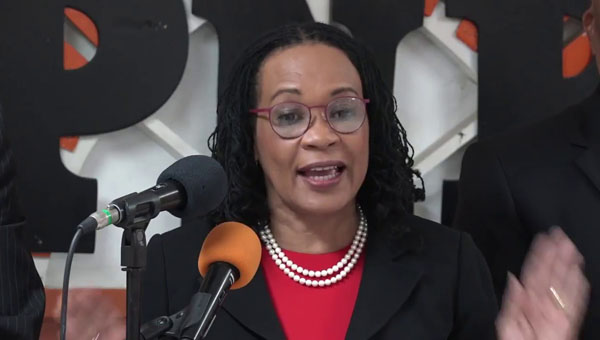 People’s National Party (PNP) spokesperson on Justice, Donna Scott-Mottley, said, in a statement, “This crisis, which we face, as a nation, is unprecedented." Photo courtesy of the PNP.

KINGSTON, Jamaica, March 30, 2020 (CMC) – The main opposition, the People’s National Party (PNP), is calling on the Jamaica government to declare a nation-wide State of Emergency (SOE), saying it believes that it is the right legislative vehicle to help fight against the spread of the coronavirus (COVID-19).

Opposition spokesperson on Justice, Donna Scott-Mottley, said there should be no ambiguity in the country’s efforts to combat the COVID-19 pandemic, and the rights and freedom of Jamaicans.

“This crisis, which we face, as a nation, is unprecedented. It is a time, when the entire country should come together, in recognition of our humanity and vulnerability.  We continue to urge all Jamaicans to take the necessary precautions, to protect yourself and family, and follow the advice, issued by of the health authorities.  We are all in this together,” she said, in a statement.

Jamaica has recorded 39 cases of the virus, and the PNP said that by declaring an SOE, it will ensure that a clear signal is sent, that the Constitution is supreme.

The PNP said that it stands ready to support the government, in the measures being taken to combat the virus, but insists that they must be anchored, within the ambit of legal provisions.

Scott-Mottley said that the Constitution sets out the framework for a situation, such as the one being experienced in Jamaica, and the rest of the world.

The government is using powers, under the Disaster Risk Management Act, to combat the spread of the coronavirus, but some have criticised the move, arguing that the administration is on a bad legal footing.

“For the avoidance of any doubt, the government should cause the Governor-General, His Excellency Sir Patrick Allen…to issue the appropriate proclamation, under Section 20 of the Constitution, which gives him the authority to so do, if he is satisfied ‘that a period of public disaster has arisen, as a result of the occurrence of any earthquake, hurricane, flood, fire, outbreak of pestilence, outbreak of infections, disease or other calamity, whether similar to the foregoing or not’,” Scott-Mottley argued.