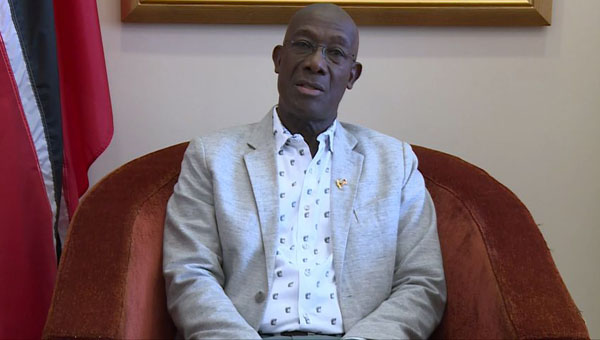 Trinidad and Tobago Prime Minister, Dr. Keith Rowley, told the twin-island nation in a broadcast from his home, that "the most wide-ranging law in this war (with the coronavirus) is the law of common sense".

In a message, delivered from his residence, just hours before the implementation of measures to curb the spread of the virus, Rowley put the country on a war path.

In making reference to citizens, who fought in both World Wars, the Prime Minister said that the battle against the coronavirus is no different.

“The difference between this war and those World Wars was, that those, who picked up arms to defend us, carried guns, fired bullets. The war that we’re fighting now, is an invisible enemy, a micro-pathogen that you will not see with the naked eye, but we know it’s there,” he said.

“This pathogen could strike us, and it could take days before we know, who is a casualty.”

“In those days, when the instruction was given, it was more than likely an instruction that said, ‘To the breaches, aim fire.’ Today, the instructions are, ‘Take cover’, meaning, stay home. Do not congregate, isolate and quarantine yourselves,” Rowley said.

“Today, every single one of us has to be a soldier, because the enemy can come from any one of us. So we have to be extra careful,” he added.

According to the Prime Minister, “the most wide-ranging law in this war is the law of common sense”.

“And as we engage, we advise, we request, we suggest, we instruct and we enforce, we expect that, all along this journey, common sense will prevail,” he stated.

He said the main weapon is basic hygiene, which “is not written in any law”.

Dr. Rowley said the law cannot guarantee that hands will be washed and faces will not be touched.

“Such is the nature of the response today, going forward. That is the antidote that’s present and, until a vaccine is available, it is the best weapon that we have. So please, let common sense prevail, and let personal responsibility be your contribution,” he said.

He noted that the true heroes in this war are the health care workers, who are on the frontline, fighting to save the lives of those affected by the virus, and doing their best to stop the spread.

He also stressed that persons should not leave their homes to exercise.

“In this emergency, I know it’s not easy to not be able to hug your grandparents and your grandchild, but that is what we give up to be safe and to be successful.”

He predicted that based on the models, it’s expected that in the coming weeks, things will get worse, with more infections and, possibly, more deaths.

“What we are trying to do is to minimise those numbers, by our response and behaviour, which simply says: withdraw and isolate. That is how we will defeat this invisible enemy,” Prime Minister Rowley contended.