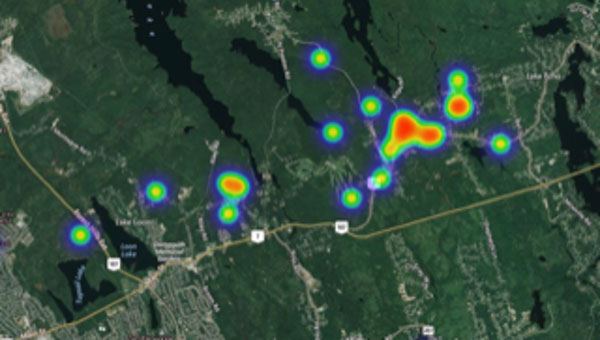 For the Preston-area communities, marginalization and discrimination are still present. Dartmouth is a predominantly white community; since 1996, it has continued to grow, creating constant pressure for landscape change and community fragmentation.

Yet, the resilience and strong cultural identity of these Black communities means they maintain a firm commitment to being a vibrant, collective community through their own efforts.

History of landscape challenges
As the oldest and largest Black communities in Canada, as well as having the highest concentration of African Canadians, this area’s complex history and relationship to the landscape continues to be at risk.

The Black Loyalists were forcibly settled in the late 18th century after betrayal and deportation by the British. Africville’s well-documented environmental racism in the 1950s also led to forced relocation. The Lincolnville landfill’s opening in 1974 without community consultation and intimidation tactics has continued feelings of mistrust. Lake Major’s community and economic development in Preston never happened; the land sale profits and land ownership were somehow directed to government agencies.

As Dartmouth’s suburbs expanded rapidly in the 1970s and ‘80s, the sparsely developed Preston area was identified as the primary target. Loose property rights and land titles, formerly fully recognized, were revoked and transferred. It was decided that the local school would be closed and moved to a nearby predominantly white community. Through a galvanized community effort, these plans were repealed as noted in a 2017 report by the Nova Scotia Barrister’s Society entitled “This Land is Our Land: African Nova Scotian Voices from the Preston Area Speak Up.”

In 1991, the Metropolitan Authority, the group appointed by the provincial government to oversee the disposal of waste within the city of Halifax, proposed a dump location in East Lake and a recycling facility in East Preston. Both schemes ultimately failed due to local coordinated efforts by African Canadians.

A recycling facility ultimately opened in Preston in 1997 — and subsequently closed in 2002 — but environmental cleanup has not occurred. Currently, the community of Preston is fighting the proposal to locate a construction demolition debris processing facility adjacent to East Preston.

Taking a fresh look at green spaces
Green spaces are an important part of these residents’ everyday life. Whether parks or natural areas, playgrounds, forests, parking lots, church areas, shorelines or paths, these communities use green spaces for many benefits.

In Nova Scotia’s African Canadian communities, green spaces, open spaces and natural areas have substantial benefits: well-being, reduced stress, exercise, sociability, sense of community, safety and happiness. With the team at the Green Infrastructure Performance Lab (GIPL) at Dalhousie University, I have mapped these spaces so they are not lost or forgotten as landscape change occurs. By doing this, we have also documented the many untitled green spaces that do not show up on any physical maps, drawings or planning documents.

Using an online, map-based survey, the team collected information about which green spaces residents visit and how they are being used in order to analyze their socio-cultural uses. Fifty-eight per cent of residents in these communities visited local green spaces to socially interact with neighbours and friends, to picnic or to play with children. Another 29 per cent also saw them as a place to relax and enjoy nature.

The spatial qualities of this community and their green spaces are distinct. Even spaces that appear unused — like parking lots — are a vital part of the community. Kardeisha Provo, a community member wrote for CBC: “We come out in full for church and basketball games. The central firehall is the ‘hangout spot — if you park or go there, someone will often join you.”

LeMeia Reddick, an urbanist and community activist, recently developed BLxCKHOUSE, a relaxed, drop-in safe space for youth and teens to do homework, crafts or just hang out. It is also a trusted community space, serving as headquarters for community initiatives such as gardening, block parties, book clubs and even protests. There are efforts underway to establish a community land trust.

Mapping community spaces
These are just some examples of local, undocumented, socio-cultural infrastructures and spaces. Understanding them is key to the community and its relationship to the landscape. This approach to community engagement and participation gives more power to planners and decision-makers to engage the public, reduce stakeholder conflict, increase community cohesion, and inform more sustainable and beneficial planning.

The African Canadian communities of the Preston area have evolved a cultural identity. This is a unique area of unique people. How this community interacts with their local green spaces shows not only how they physically shape their community and spaces, but also offers insight into other rapidly developing and under-represented communities.