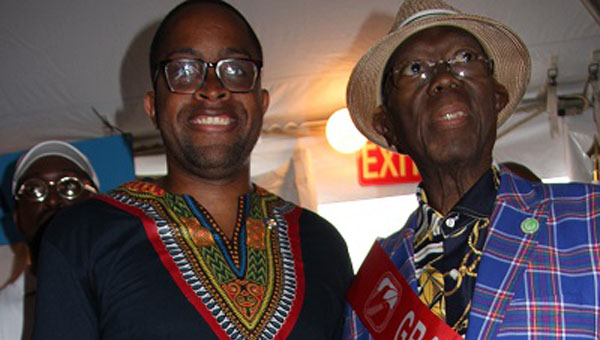 “It is with a heavy heart, on behalf of mom, Dr. Eda; my brother, Roy, Jr.; and my sisters, that I announce the passing of the king of our hearts, Dr. Roy A. Hastick, Sr.,” said his daughter, Renee Hastick-Motes, in a statement, yesterday.

“Job well done, daddy,” she added. “We will forever love and cherish every moment we had with him.”

Dr. Rudolph F. Crew, President of the predominantly-Black Medgar Evers College, in Brooklyn, confirmed that Hastick — who held an honorary doctorate from the college, and who had suffered a stroke, many years ago — had passed away, yesterday, “following complications, related to COVID-19”.

Hastick’s wife, Kittitian-born Dr. Eda Hastick, who, reports indicate, is currently hospitalized, is a former Chair of the Department of Social Work at Medgar Evers College.

“Hastick and his wife have given so much to our college,” said Dr. Crew, in a statement. “Please join us, in extending condolences to the Hastick family, at this time. We will always remember his spirit, and continue to work to create business and generational wealth in our communities.”

Grenadian-American, New York City Public Advocate, Jumaane Williams, described Hastick as “an impassioned leader, a giant in the Caribbean community, and a dedicated partner, in helping others to experience the splendor of Caribbean culture”.

“It was my privilege to work with Dr. Hastick, with whom I share Grenadian heritage, and my honour to be a partner in strengthening and advancing the Caribbean community,” he told the Caribbean Media Corporation (CMC), in an exclusive interview, last night.

Williams added that as President and Founder of CACCI, Dr. Hastick was dedicated to supporting, uplifting and championing small businesses, and innumerable business owners and patrons benefitted from his commitment to Caribbean-owned commerce.

“Here, in New York City and in the Caribbean, where we share roots, he was recognized and celebrated for his steadfast efforts and positive influence, an impact that will long continue and that many of us are reflecting upon on, this sad day,” he continued. “I join my fellow Caribbeans and all of New York City in mourning his passing and celebrating his legacy.”

“Uncle Roy, as we affectionately called him, was a mentor to many of us,” she commented. “He wanted to ensure that we excelled in whatever we did. He wanted Caribbean people to be proud of their heritage and to showcase it.”

“We must all continue to keep his legacy alive,” added Persaud. “My condolences to his wife, Dr. Eda Hastick, and his children. May we all remember Uncle Roy, with love in our hearts.”

“His leadership and presence will be sorely missed,” he memorialised. “To his wife, Dr. Eda Hastick, who I pray will make a full recovery, and children, I pray with you that God will comfort you and give you strength, throughout this time of tremendous grief. The entire community mourns this loss. R.I.P Roy.”

Haitian-American New York State Assemblywoman, Rodneyse Bichotte, said it was with great sadness that she learned of the passing of his “mentor…. a big stake in our community, an advocate for #MWBE (Minority Women-owned Business Enterprises) and small businesses”.

Bichotte, Representative for the 42nd Assembly District in Brooklyn and the newly-elected Chair of the Brooklyn Democratic Party, described Hastick as “the true pioneer of our Caribbean economic engine, here, in New York City”.

“He was mentor to me, who cared for me, like a father,” he reminisced. “Dr. Hastick was instrumental in supporting small business in our community, and empowered everyone, he came across. He always reminded us, ‘networking works’. Dr. Hastick will forever be remembered in our hearts and minds.”

In a joint statement, Brooklyn Borough President, Eric L. Adams, and his deputy, Ingrid P. Lewis-Martin, said: “Dr. Hastick’s longstanding commitment to representing the interests of Caribbean people and business at the Brooklyn, New York City, and New York State levels, and his steadfast endeavors to strengthen commercial links, between the Caribbean and the Diaspora, is unparalleled, and will not soon be forgotten.”

Adams said he would personally cherish the decades-long collaboration and friendship that he shared with Dr. Hastick.

In light of his work in the small business community, Adams had appointed Dr. Hastick Honorary Brooklyn Ambassador.

Randy Peers, President and Chief Executive Officer of the Brooklyn Chamber of Commerce, said his long-time friend and colleague had done tireless work, on behalf of Caribbean Americans, African Americans, women and other minority entrepreneurs, across the tri-state area, and it would be sorely missed.

Peers recalled that Hastick had partnered, over the years, in Brooklyn Chamber of Commerce’s “Brooklyn Goes Global” import-export work.

Dr. Hastick, who was born in Grenada on May 10, 1950, migrated to the US in 1972. He has served as a social worker; community advocate; entrepreneur; newspaper publisher; radio and television announcer; as an elected delegate to the White House Conference on Small Business; and as delegate to the United Nations.

In 1985, he founded CACCI, which has since expanded its mission to promote economic development and small business services.

“Dr. Hastick’s remarkable record of achievements will continue to serve those he touched over the years,” Peers said.

Dr. Hastick had received numerous awards and was credited with creating the CACCI structure that assists small businesses in the State of New York.

In August 2017, the CTO and CACCI formalized a cooperation strategy, between the two organizations, to enhance the level of engagement with the Caribbean Diaspora and to strengthen relationships with entities, serving the people of the Caribbean.