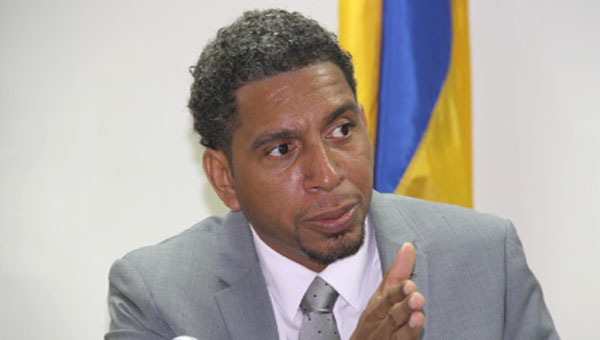 KINGSTOWN, St. Vincent and the Grenadines, April 10, 2020 (CMC) – Minister of Finance, Camillo Gonsalves, did not sugar-coat the reality of what lies ahead, as he warned that the COVID-19 pandemic will result in major economic fallout for the multi-island nation.

“Make no mistake, there are rough waters ahead, for our public health, our society and our economy. We have never been down this path before,” Gonsalves told Parliament, on Tuesday.

He notified the country’s parliamentarians that the COVID-19 pandemic is much more than a grave threat to the health of Vincentians.

“The rapid global spread of the virus has precipitated an economic emergency, of unprecedented scope and scale. The international economy is grinding to a halt, as all conduits of global trade and commerce are severed,” Gonsalves related, as he asked lawmakers to approve his fiscal package.

“There is no sugar-coating of the fact that the COVID-19 pandemic makes 2020 a year of shrinking economies, growing deficits and mounting liquidity-challenges, across CARICOM. St. Vincent and the Grenadines will not be spared the massive economic fallout of this pandemic,” he reasoned.

“Even in the midst of the steep tourism decline, after the 911 terrorist bombings in the United States, airlines were still flying. Even in the catastrophic aftermath of the 2008 global economic and financial crisis, world trade continued. Further, the post-2008 crisis did not have the lingering public health uncertainties that beset us, today,” he noted.

The Finance Minister declared that St. Vincent and the Grenadines is “facing a one-two punch of collapsing tourism and global recession”.

“The effects of the tourism shutdown will be felt, immediately — and are being felt. The impacts of the global recession may hit us later, and last longer. In addition to this one-two punch, a third and potential knockout blow awaits, in the form of the 2020 Atlantic hurricane season,” Gonsalves warned.

He said that experts predict an above average hurricane season, with 16 storms and eight hurricanes, four of which will be Category three, or above.

“According to the current predictions, we can only pray that our recent string of good fortune will continue, and that we will be spared the impact of this busy, upcoming hurricane season,” he cautioned.

He pointed out that the grim and ever-present potential of a catastrophic climate event aside, “we must recognize the certainty, severity and complexity of the socio-economic calamity that now faces St. Vincent and the Grenadines.

“In the face of the challenges ahead, the government must act, and in shaping our response, the economic policy must be guided by three clear objectives, the first of which is minimizing the loss of life and strengthening the public health system to cope with more widespread infections.”

Even as Parliament was still debating the package, the country recorded its eighth confirmed case of COVID-19. More than 400 people are in quarantine.

Fears over the infectious disease have left the nation’s capital, Kingstown, the centre of economic activity, like a ghost town, on the eve of Easter, the second largest religious celebration after Christmas.

Finance Minister Gonsalves said that the second objective is to minimize the economic impacts on vulnerable Vincentians, displaced workers and the most affected sectors.

“And third, to keep the economy afloat, through targeted stimulus spending, while maintaining macroeconomic stability and laying the groundwork to resume growth, when the pandemic abates,” he added.

Gonsalves said that while there is no contradiction among the three objectives, “there is certainly some tension”.

“As a small country, with limited resources, we have to make difficult decisions about how to apportion money among our health care, bailout, and stimulus goals,” he said.

“Let us be clear, we do not have the ability, or the money, to heal the sick; or to make every person whole; or to bail out every business; or to fully jumpstart the economy. In these rough waters, we are trying to keep our people and our economy afloat. We are entering a period of survival. After the pandemic, it will be easier to revive an economy or a sector that was kept afloat, than one that drowned in the turbulent waters that we must navigate.

Noting the size of the stimulus package, relative to GDP, Gonsalves said: “At such a size, this recovery and stimulus package is large. And it is an ambitious investment in our health, in our people, and in our economic future.”

He noted that on April 3, Kristalina Georgieva, Managing Director of the International Monetary Fund (IMF), called the pandemic “humanity’s darkest hour and a big threat to the whole world”.

Georgieva further said that the crisis was unlike any other in the history of the IMF, in that the world economy had come to a standstill.

“We are now in recession. It is way worse than the global financial crisis,” Georgieva had said.

Gonsalves said that even as St. Vincent and the Grenadines continues to avoid the worst of the pandemic, from a public health perspective, it has already been battered by the fast-moving economic catastrophe, noting the collapse of the country’s tourism and hospitality sectors.

“There are no flights into the country, no cruise ships arriving and, consequently, no guests in hotels. Traditional mainstays of the tourism calendar, from the Easter Regatta to Carnival, are being cancelled or rescheduled. The consequential knock-on effects for other sectors and the national economy are obvious. Tourism is in deep trouble,” Gonsalves reported, adding that it was anybody’s guess when the sector would return to normalcy.

“Unemployment and underemployment are increasing rapidly,” he said further, elaborating that rising joblessness is being driven primarily, by closures in hotels and shutdowns in restaurants, entertainment and the informal sector.

“As a result, hard-won gains, in enhancing the lives of our most vulnerable Vincentians, are under threat. Similarly, employment and economic slowdowns in our Diaspora communities foreshadow potentially destabilizing reductions in remittances, logistical challenges. Economic uncertainties have halted or slowed some important infrastructure projects, here, in St. Vincent and the Grenadines. As capital departs from developing economies for the relative safety of advanced countries, previously-scheduled foreign direct investments will slow to a trickle.”

The Finance Minister said this has immediate implications for unemployment, and poses medium-term challenges to the country’s developmental timelines.

“Fewer tourists, less economic activity, disrupted supply chains, and reduced foreign direct investment, mean less revenue for the government to pay its own bills and advance its own developmental agenda. Economic shrinkage in St. Vincent and the Grenadines in 2020 is all but certain,” he said, noting that at the beginning of the year, the Eastern Caribbean Central Bank predicted regional economic growth in the Organization of Easter Caribbean States (OECS) of 3.3 percent.

“Today, the Central Bank’s most recent projections suggest that the regional economy may shrink by almost seven percent. This represents a 10 percent swing, relative to the projections of just a few months ago.”

Gonsalves mentioned that various scenarios of the Ministry of Finance predict an economic contraction of, as much as five percent, versus “the moderate growth projections of just two months ago”.