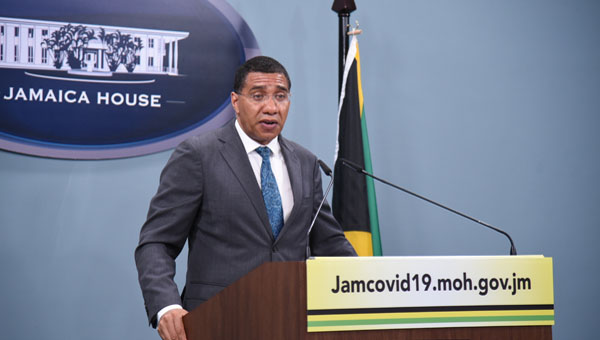 KINGSTON, Jamaica April 11, 2020 — Prime Minister, Andrew Holness, revealed that the government is considering reopening the island’s ports, for the controlled re-entry of Jamaicans, who have been stranded, overseas.

The country closed its borders to incoming passengers on March 24, as part of measures to stem the spread of the coronavirus (COVID-19). Since then, there have been numerous calls, by Jamaicans, who have been stranded at sea and overseas, for them to be allowed to re-enter.

Holness, who was speaking at a digital press conference, from Jamaica House, on Wednesday, said, while he understands the plight of these citizens, “it cannot be a wholesale re-entry”.

The Prime Minister noted that a large-scale re-entry would put a strain on public health workers and the country’s resources, and would require a massive logistics operation.

“Opening up the borders again, depends on how well we get totally under control of this unknown population that came in, and how they’re keeping faithful to the quarantine requirements and reporting. We need to understand their health status, before we take in new populations, which would stretch the resources,” he said.

The Prime Minister said the government has been considering establishing certain protocols that would allow re-entry.

“Those protocols would entail State quarantine, and for that to happen, we need to establish the rooms. We do have some rooms, but certainly not enough, and we are trying to expand that, very rapidly,” he pointed out.

Furthermore, the Prime Minister said, an end-to-end protocol would also have to be in place, that would require that those incoming Jamaicans, upon arrival, be taken to a quarantine site and be isolated from the population, in a controlled manner.

“All of that requires a massive logistics operation. I’ve asked the Minister of National Security and the Minister of Foreign Affairs and Foreign Trade to pull together that kind of logistics coordination and give it ministerial oversight,” he indicated.

According to Holness, hopefully, by the next press briefing, he will be able to say something definitive, as to what provisions have been made, concerning the controlled re-entry of Jamaicans.

In the meantime, the Prime Minister is reminding Jamaicans and foreigners that the country’s borders remain open, for the movement of cargo.

“There is a view that our borders are closed generally, and it is having an impact on trade and the movement of cargo. I want to take this opportunity to say that none of the Orders that we have put in place, has, in any way, limited or restricted, the movement of cargo and trade,” he reiterated.

“Our [sea] ports and airports are open, wide open now, to cargo. In fact, send in all the cargo and send out all the cargo; let’s keep the economy turning over,” the Prime Minister emphasised.