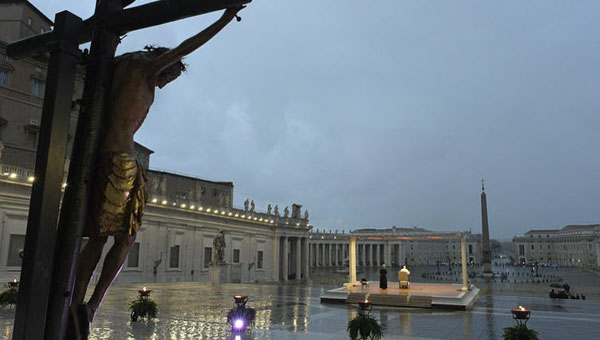 A crucifix, believed to be miraculous, that in 1552 was carried in a procession around Rome to stop the great plague, left, frames Pope Francis, wearing white, as he delivers a prayer from an empty St. Peter’s Square, at the Vatican, on March 27, 2020. Photo credit: Yara Nardi/Vatican News via AP.

How Canadian Faith Communities Are Responding To The Coronavirus Pandemic

Recent media articles have highlighted how religious leaders are connecting with their community members via livestreamed services or even Twitter sermons. However, research on faith-based humanitarianism suggests that faith communities play a much broader role during times of crisis.

My survey of faith communities shows how they are uniquely positioned to support people and foster resilience during the COVID-19 pandemic. Because of their moral authority and wide networks, they provide sources of solidarity, knowledge, authority and meaning.

Sources of solidarity
Faith communities can readily engage in acts of solidarity that build community resilience. They can easily identify vulnerable community members and quickly mobilize to provide support.

Sikh temples regularly hold a langar, a community kitchen offering free meals to temple visitors. Now some temples in Surrey, B.C. are offering a free take-out langar as well as organizing grocery deliveries to seniors and people with disabilities. The Sikh Awareness Foundation has launched a “No Hungry Tummies” initiative to provide hot meals to vulnerable community members throughout B.C. Khalsa Aid is providing free grocery essentials at various pick-up points throughout the Greater Toronto Area.

Similarly, the Ahmaddiya Muslim Youth Association has launched a nationwide Neighbourhood Helper campaign. Canadians can request assistance by signing up online or calling a helpline; youth members will support them by picking up groceries or medications.

The UJA (United Jewish Appeal) Federation of Greater Toronto has expanded its annual Global Seder campaign to assist at-risk families in the region during the pandemic.

Finally, yoga studios and meditation apps offer a more secular form of spiritual solidarity for people unaffiliated with a formal religious institution. Many of these are offering free online classes as a way to support people through these challenging times.

Sources of knowledge
These same wide networks enable faith communities to have direct access to what is happening at the local level. This is particularly important in contexts that are closed to outside observers.

For my current research on Canadian Christian missionary organizations, I attended Missions Fest Manitoba in February, a conference in Winnipeg that attracted representatives from over 100 Christian organisations. A handout from one organization described how they maintain direct contact with members of underground house churches in China, which are illegal churches not sanctioned by the Chinese government.

As a result, the organization was able to get detailed knowledge about what was happening in Chinese communities during the early days of the coronavirus crisis. They also provided funds for medical supplies to be disbursed to community members, even while the Chinese state was suppressing information.

In such cases, faith communities act as first responders as well as information channels.

Sources of authority
It sent a strong public health message when Pope Francis cancelled his Sunday blessing at a window overlooking St. Peter’s Square. This weekly ritual has rarely been cancelled since 1954.

Likewise, the Dalai Lama released a public letter of support for Indian Prime Minister Modi’s strict measures to prevent the spread of the coronavirus in that country.

During this time of crisis, people may find strength, hope and purpose through their connections to faith communities.

In Canada, the UJA Federation of Greater Toronto has issued public health updates to Jewish organizations with the goal of facilitating a consistent community-wide response.

These voices have strong moral authority within and beyond their communities, so have the ability to influence the public to listen to public health recommendations.

Unfortunately, this is also the case when leaders choose to ignore public health recommendations, which can have significant negative consequences. For instance, many U.S. churches continue to remain open for services and draw hundreds of worshippers. This is despite state bans on public gatherings and numerous previous examples of coronavirus hot spots stemming from large religious gatherings.

Sources of meaning
According to a draft paper released by University of Copenhagen economics professor Jeanet Sinding Bentzen, Google searches about prayer skyrocketed during March as the coronavirus went global. Even people who do not consider themselves to be religious are turning to prayer as a way to cope with the crisis.

Faith communities help people create meaning in times of great uncertainty or anxiety. Kenneth Pargament, a psychologist of religion and health, has argued that “the language of the sacred – forbearance, mystery, suffering, hope, finitude, surrender, divine purpose and redemption” – can help people cope with situations beyond their control.

For example, the executive director of the Muslim Association of Canada advised the organization’s members that “we should see this as the time to embody the defining quality of a believer: to be of benefit to God’s creation.”

Similarly, the Dalai Lama advised Buddhists to chant the “Tara mantra” in response to the pandemic. Chanting mantras is a practice that Buddhists use to cultivate compassion for themselves and all sentient beings. The Tibetan Canadian Cultural Centre in Toronto requested its members to recite as many of these mantras as possible and report back their totals to get a full community count.

Faith communities, outside of formal religious institutions, also help people to create meaning. Jack Kornfield, a popular teacher of mindfulness meditation practices, has created a pandemic resources page on his website. It includes guided meditations on how to cultivate a steady heart or respond to difficult emotions during difficult times.

It is important to understand what increases the resilience of individuals and communities during times of challenge and uncertainty. These examples suggest that many Canadians will experience the COVID-19 pandemic within a framework that is shaped by a faith community. More importantly, they demonstrate how faith communities are at the forefront of community-led responses to the pandemic.

During this time of crisis, people may find strength, hope and purpose through their connections to faith communities.

Andrea Paras is an Associate Professor of Political Science, at the University of Guelph.