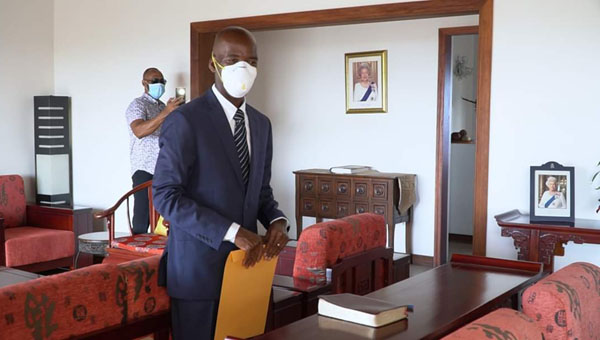 ST. GEORGE’S, Grenada, April 15, 2020 (CMC) – The vacant seat of Leader of the Opposition was filled, yesterday, for the first time since 2013, with the appointment of Tobias Clement, a former member of the ruling New National Party (NNP).

The office became vacant in 2013, following the general election of that year, when the NNP won all 15 seats in the House.

Before Clement, the leader of the opposition was Prime Minister, Dr. Keith Mitchell, who held that post, from 2008 to 2013.

Clement, who is affectionately called “Toby”, campaigned as the NNP candidate for the general elections in 2013 and 2018, and won his seat as the member of parliament for the constituency of St. George’s North East area.

However, he resigned from the party in December 2019, and indicated then, that he would not abandon the people of his constituency.

Earlier, yesterday, Clement took the oath of office and received his instrument of appointment, from Governor-General, Dame Cecile La Grenade.

He will be the only opposition member in the House of Representatives and. As Leader of the Opposition, Clement will, among other things, be appointed as Chairman of the Public Accounts Committee, appoint three opposition senators, and occupy the office of opposition leader in the Parliament building.

His first task as leader of the opposition was to attend a virtual meeting of the finance committee, in which the members are reviewing a revised appropriation bill, to facilitate the proposal, presented in the COVID-19 stimulus package, as announced by Prime Minister, in early March.