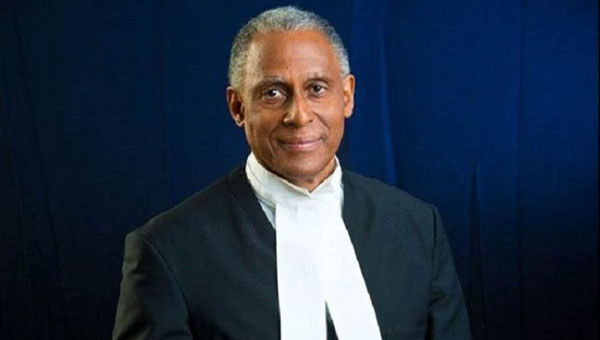 Caribbean Court of Justice (CCJ) President, Justice Adrian Saunders (pictured), noted that, since its inauguration in 2005, the Court has worked on the premise that it is more than just a building.

PORT OF SPAIN, Trinidad  and Tobago, April 17, 2020 (CMC) – The Trinidad and Tobago-based Caribbean Court of Justice (CCJ), marked 15 years of service to the region, yesterday, with President, Justice Adrian Saunders, saying that the institution has offered a different approach to regionalism.

In an address, to mark the anniversary of the institution, Saunders noted that, since its inauguration in 2005, the court has worked on the premise that it is more than just a building.

“This is a service that we have taken seriously, as the establishment of the CCJ was a defining moment in the history of the people of the region. For those countries that embrace our appellate jurisdiction, it symbolises the end of colonial ties,” Justice Sanders philosophised.

The CCJ President also lauded persons, who have worked hard, to ensure the Court’s efficiency and effectiveness.

“The staff of the registries of national judiciaries that support us, must also be complimented for their assistance. We take the time to applaud, each and every one of these staff members, for their unfailing dedication to continually go, over and beyond, the call of duty,” he said.

He added that the regional organization, in adopting the vision “to be a model of judicial excellence”, has “risen to the challenge, ensuring that we produce quality judgments that are responsive to the needs of the region and are reflective of our history, values and traditions. We have also promoted a culture that supports legal development, one that enhances the quality of judges and court administration throughout the region”.

According to Saunders, this has resulted in capacity-building bodies, such as the Caribbean Association of Judicial Officers, the CCJ Academy for Law and The Judicial Reform and Institutional Strengthening Project, each of which, helps to transform the legal profession and justice sectors, across the wider Caribbean.

He also said that the court has been one that has responded to the need to meet its peoples, virtually.

“Thus, our present climate has afforded us the opportunity to reap the benefits of our technology. Many hearings are conducted, via video conferencing. Our new Practice Directions allow for emergency hearings, so that we can continue our work, seamlessly, in both sure and uncertain times,” Justice Sanders expounded.

Saunders also thanked the countries “that have allowed us to serve them, both in the original and appellate jurisdictions. We also thank counsel, both from the region and outside the region, who have appeared before the Court, and assisted us with their submissions. Your faith in us is our driving force, as we continue to work towards “providing accessible, fair and efficient justice for the people and states of the Caribbean Community”.

In its Original Jurisdiction, the CCJ is an international court with exclusive jurisdiction to interpret and apply the rules, set out in the Revised Treaty of Chaguaramas (RTC), and to decide disputes, arising under it.

In its Appellate Jurisdiction, the CCJ is the final court of appeal for criminal and civil matters.