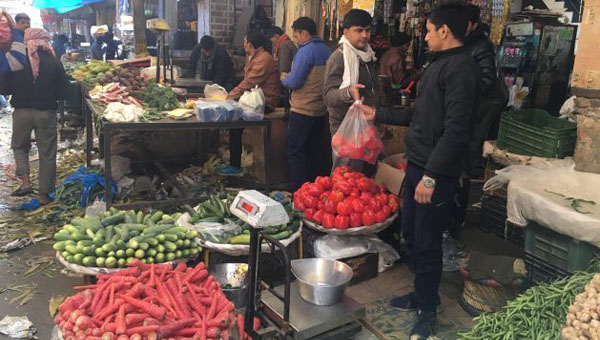 Agricultural markets or mandis have few buyers, due to the coronavirus lockdown, across India. Photo credit: Neeta Lal/IPS.

As a nationwide lockdown has confined a record 1.3 billion Indians to their homes since March 24, one of the hardest hit communities has been that of Indian farmers.

Crashing prices and transport bottlenecks, due to the 40-day coronavirus lockdown in India, until May 3, have driven some to set their unsold produce ablaze.

As a nationwide lockdown has confined a record 1.3 billion Indians to their homes, since March 24, one of the hardest-hit communities has been that of Indian farmers.

Crops set ablaze and farmer suicides
“We take our produce to the mandi (market) but there are hardly any buyers, these days. I was forced to sell four quintals of chilli at Rs 10 per kg, as against a normal price of Rs 40. But I was desperate to clinch the deal, else the transportation cost of bringing all that produce back, would have broken my back,” Lekhi Ram, a smallholder farmer from Khairpur village, of west Greater Noida, Uttar Pradesh, told IPS over the phone.

Unable to harvest his crop in time, Ram’s neighbour, also a smallholder, set his fields on fire. Unexpected rain and hail stones, last week, decimated whatever little was left.

“The leftover vegetables were fed to the sheep and goats,” said Ram.

“We were hoping to reap a rich harvest of rabi (spring) crops, due to a good spell of rains. But God clearly had other plans,” Balbir Singh Rajewal, President of the Bharatiya Kisan Union in Punjab, a representative organisation for small farmers that protects their interests, told IPS.

“Urban demand has been minimal during the lockdown. Even online grocery stores, whose orders we normally can’t cope with, have stopped calling.”

Farmer suicides have been reported from some villages. A farmer, in the southern Indian state of Karnataka, committed suicide, last week, after being unable to sell his harvest because of the lockdown.

Rambhavan Shukla, another farmer, from Jari village in Uttar Pradesh, killed himself, by hanging, from a tree, over non-availability of labourers for harvesting his wheat crop.

Nearly 700 million people, of the country’s 1.3 billion, rely directly, or indirectly, on an agriculture-derived livelihood.

Agriculture and allied sectors sector contribute 16.5 percent to the country’s $2.6 trillion GDP, according to the Indian government’s Economic Survey 2019-20. As per International Labour Organisation’s (ILO) statistics, the share of agriculture in India’s total workforce was 43.9 percent in 2018.

The ILO warned, last week, that about 400 million workers, engaged by the informal economy, which accounts for a staggering 90 percent of the country’s total workforce, risk falling deeper into poverty, during the ongoing crisis.

Farmers unions ask government to do more
A report, released by the World Bank, stated that the pandemic will reinforce inequality in South Asia, urging governments to ramp up action to protect their people, especially the poorest and most vulnerable, including through temporary work programs.

According to Jagdish Singh, President of the Bhartiya Kisan Union, Madhya Pradesh, a representative body of 0.3 million farmers, bureaucratic apathy has hurt farmers most.

“We didn’t get any combine harvesters from Punjab, due to transport restrictions, due to which we weren’t able to harvest our grain on time. Lack of farm labour and bad weather, last week, only made things worse,” Singh related.

He rues that the state government made no efforts to operate local mandis to enable farmers to sell whatever grain they were able to harvest.

“Through our own efforts, we’ve been running a mandi in the town of Satna [Madhya Pradesh] to sell pulses, mustard and wheat, while observing social distancing norms. This helped many families to get some money for sustenance. There are many districts, across Madhya Pradesh, where there are no corona cases. Why isn’t the government operating markets there?” Singh questioned.

Grain farmers, with larger land holdings, are experiencing greater struggles, under the combined effects of low demand and acute paucity of migrant farm labour. This has severely interrupted agricultural patterns, especially harvesting activities in the northwest northern breadbasket states of Uttar Pradesh, Punjab and Haryana, where wheat and pulses are grown, said Rajewal.

Food stocks may help weather the storm…
In southern Tamil Nadu and Maharashtra, for farmers who cultivate cash crops, like cotton, onion and bananas, transportation has proved to be an issue.

According to Pravin Paithankar, President of the Maharashtra Heavy Vehicle and Inter-State Container Operators’ Association, as urban areas are reporting more coronavirus cases than rural ones, truck drivers and container operators are preferring to stay in their villages.

“They won’t be back until May-June,” Paithankar told IPS.

Immediately after the nationwide lockdown was announced, Finance Minister, Nirmala Sitharaman, declared a 1.7 trillion Rupee (about $22 billion) package, mostly to protect vulnerable sections (including farmers) from any adverse impacts of the pandemic.

However, with most Indian farm households being small and marginal farmers, and a significant part of the population being landless farm labourers, this amount is woefully inadequate, according to Rajewal.

Of the total agricultural workforce in India, 45.1 percent are cultivators (farmers with land or self-employed in agriculture) and the rest, 54.9 percent, are agricultural labour (or landless), as per the Pocket Book of Agricultural Statistics of 2017.

The current crisis will also have a domino effect on agricultural output, during the kharif (winter) season, as good quality seeds, fertilisers and other inputs are not available, a senior official of Uttar Pradesh’s food, civil supplies and consumer affairs department, who did not wish to be named, told IPS.

Given how the unfolding crisis has hit the farming community, the All India Kisan Sangharsh Coordination Committee, an umbrella organisation of over 250 farmer unions across the country, urged Prime Minister, Narendra Modi, to procure the entire wheat produced in the country, to protect farmers.

Despite the turbulence within the rural economy, however, there’s optimism that India’s food security won’t suffer. The country maintains substantive buffer stocks of wheat and rice and its granaries are overflowing, with nearly 60 million tons of food grain, according to the Food Corporation of India.

However, keeping supply chains functioning, seamlessly, will be vital for future food security, warn experts, for which farmers must have continued access to markets. Indian Institute of Technology (Gandhinagar) scientists, who analysed 150 years of drought data, have highlighted, in a report, that 2 to 3 million deaths in the Bengal famine of 1943 were due to food supply disruptions — not lack of food availability.

According to the Food Sustainability Index, created by the Barilla Centre for Food and Nutrition and the Economist Intelligence Unit (EIU), among other middle income countries, India has an above-average score of 65.5 out of 100, when it comes to sustainable agriculture.

…and what about post-COVID-19?
Meanwhile, experts say in the post-COVID-19 scenario, existing food and agriculture policies must be repurposed to factor in pandemics. In an essay, Containing COVID-19 impacts on Indian agriculture, Dr. Arabinda Kumar Padhee and Dr. Peter Carberry argue that development of export-supportive infrastructure and logistics would need investments and support of the private sector to boost farmers’ income in the long run.

The duo also suggest that India — being trade-surplus on commodities like rice, meat, milk products, tea, honey, horticultural products — should seize the opportunities, by exporting such products with a stable agri-exports policy. India’s agricultural exports were valued at $38 billion in 2018-19 and can rise up further, with conducive policies.

“The government of India has now increased its focus on nutrition (besides food) security and raising farmers’ income, rather than enhancing farm productivity. Changing consumer behaviour with suitable programs and incentives, is already in the agenda.

“For all these to happen, the existing landscape of policy incentives that favour the two big staples, of wheat and rice, has to change. Designing agricultural policies, post-COVID-19 scenario, must include these imperatives for a food systems transformation in India,” wrote the experts.