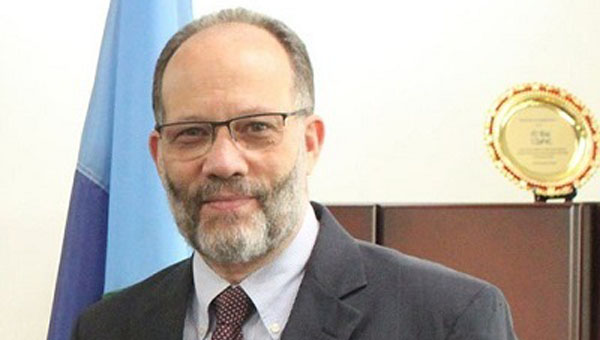 Yesterday, Ambassador Irwin LaRocque (pictured), CARICOM's Secretary General, had informed GECOM that it was awaiting information from Guyanese officials, on the availability and authorisation of a chartered flight to fly the team to and from the country.

GEORGETOWN, Guyana, April 27, 2020 (CMC) – Members of the CARICOM (Caribbean Community) election observer team, who will be scrutinising the national recount of Guyana’s March 2, ballots, will soon begin undergoing tests for COVID-19 in their respective home countries.

CARICOM’s Secretary-General, Ambassador Irwin LaRocque, informed the Chair of the Guyana Elections Commission (GECOM), retired Justice Claudette Singh, that arrangements will be made for the members of the team to be tested in their respective countries, using the World Health Organisation (WHO) approved PCR COVID-19 test.

The home tests for the novel coronavirus, is a requirement for the team, even as Guyana battles the pandemic.

The National COVID-19 Task Force (NCTF) decided, last week, that should any member be unable to have the test done, before they arrive in Guyana, they will have that test done here, and will be quarantined for 48 hours, while they await the results.

The Secretary-General also informed the GECOM Chair that a request has been made for the WHO-approved PCRCOVID-19 to be administered to the team members, before they depart Guyana.

GECOM had said that it is awaiting information, as to when the team will arrive, before deciding when the national recount will commence.

The elections body said it is hoping to have the entire process completed within a 25-day timeframe. However, that will depend on the pace of operation, which it said will be determined, after an observation of the first week.

CARICOM, in the meantime, said it has also requested approval for the departure and landing of a chartered flight, from Guyana, to collect the team members and return the same day. Similar arrangements are being made for their return, upon completion of the exercise.