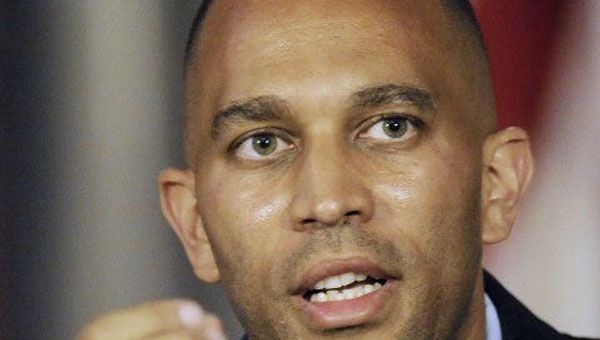 High-ranking Congressman, Hakeem Jeffries, Chairman of the United States' House of Representatives’ Democratic Caucus, argues that Guyanese should be able, without US interference, to choose who they see as fit to lead them.

The Guyana Elections Commission (GECOM) is currently conducting a countrywide recount of all ballots, in the presence of Caribbean Community (CARICOM) scrutineers.

Congressman Hakeem Jeffries, Chairman of the US House of Representatives’ Democratic Caucus, accused US State Department officials of interfering in the elections to benefit Guyana’s main opposition party — the People’s Progressive Party/Civic (PPP/C).

“Traditionally, we can monitor how democracy is playing itself out, in different parts of the world, but to interfere in such an extraordinary way and an in manner, which favours one party, the opposition party, potentially to the detriment of the ruling party, is deeply troubling to a lot of us in Washington, D.C.,” said Jeffries, who represents the 8th US Congressional District in New York.

Jeffries, whose district encompasses large parts of Brooklyn and Queens, New York, with a significant concentration of Caribbean immigrants, made the comment on a television show, hosted by Rickford Burke, President of the Brooklyn, New York-based Caribbean Guyana Institute for Democracy (CGID).

Burke claimed that the US government officials have also made several threatening statements, against officials of President David Granger’s ruling coalition government — A Partnership for National Unity (APNU) and the Alliance For Change (AFC) — as well as against GECOM officials.

“I do find it somewhat ironic that, at the same time, when the US government may be trying to direct Guyana, as to how it should conduct itself, in the form of an election, that we’ve been so irresponsible in many parts of the country, like in Wisconsin, where there is a refusal to permit universal access to mail-in voting, and you compel people to vote in densely-packed polling sites, as was done in a Wisconsin election in early April, in a manner that may have contributed to community spread, in terms of COVID-19,” said Jeffries.

A member of the House Judiciary Committee, Jeffries invoked Robert Muller’s investigation into the Russian interference into the US 2016 presidential election.

He noted that “Russia interfered in the US election, in sweeping and systematic fashion, to help Donald Trump win the US presidency”, contending that the Mueller Report also concluded that the Trump campaign’s acceptance of the Russians “was wildly inconsistent with American democracy”.

Jeffries, who was also a House Manager of the Trump impeachment trial in the US Senate, underscored Trump’s invitation for Ukraine to interfere in the US 2020 elections, to dig up dirt against presumptive Democratic presidential candidate, former US Vice President, Joseph Biden.

He called on US government officials to allow the Guyanese people to freely elect its government, without interference from the US government.

“It is appropriate to broadly ensure that there is a free and fair election in Guyana, and in other parts of the world, that is carried out independently and in a manner that does not result in the United States trying to sway or alter the results, one way or the other,” Jeffries said.

“The people of Guyana should be able to decide, as they have done in the past, who they see fit to lead them into the future,” he added.