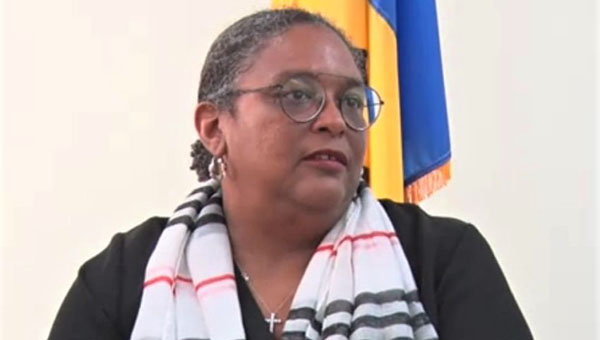 BRIDGETOWN, Barbados, May 15, 2020 (CMC) – Prime Minister, Mia Mottley, has promised that there will be no job cuts in the public service, but hinted at the prospect of forced savings, as the island emerges from the lock-down, occasioned by the coronavirus (COVID-19) that has impacted the socio-economic future of Barbadians.

Speaking at a news conference, following a lengthy meeting with members of the Social Partnership, Mottley said some of the salaries of public workers would be invested in bonds, which would be redeemed at a later date.

“The Social Partnership, therefore, discussed as well, the option that I raised on the last occasion, on which I spoke, which is how do we best share the burden, and do we not need to look at some level of adjustment, on the part of those who are working, in the form, not of wage cuts in the public sector, but what we call forced savings.

“In other words, to allow government to be able to spend money on other things, particularly capital projects, to be able to get more people working,” Mottley told reporters, last night.

The last time the Barbados government attempted to withhold the pay of public officers – an eight percent cut was instituted in 1991 – which was credited with the saving of the dollar.

But although the withheld money was later repaid, the then-Owen Arthur administration amended the Constitution to outlaw a future pay cut.

Mottley, who announced that a new phase of the re-opening of the economy would take place, on Monday next week, said a final decision would be made in the coming weeks, after further discussions with the Social Partnership.

“We do have to cut expenditure. We do not want to cut jobs, and some form of burden-sharing is appropriate; and I think, I can fairly say that if that is the view of both the labour movement and the private sector, then there should be no further job cuts for the sake of COVID-19, [but] there may always be job cuts for restructuring of institutions.”

Mottley said that some private sector employers had resorted to cutting salaries of their workers, by as much as 100 percent, instead of sending them home.

“The Social Partnership, both the private sector and the labour movement, advises that their members have been facing similar situations and, in many instances, they have asked workers to take cuts, ranging from 15 percent right up to 50 percent, but in some instances 100 percent,” she said.

But Mottley said that those employees, who opted to forfeit their entire pay cheques, were in a financial position to do so.

Barbados, like other Caribbean countries, was forced to implement measures, aimed at curbing the spread of the coronavirus (COVID-19).

Mottley said that under the third phase of the exercise, several businesses would be allowed to re-open, but that the 8.00 pm. to 5.00 am (local time) curfew would remain in effect.

She told reporters that with the spread of COVID-19 projected to be on a downward trajectory, her administration was working towards “balancing lives and livelihoods”, since it was important to provide safe work for safe people, to provide as many employment opportunities for Barbadians as possible and to ensure that every household in Barbados “can eat food every day”.

“I hope, however, that in our drilling down, we are in a position to put as many people back to work, week by week, by week, without compromising the gains that the country has made, with respect to where we are with COVID-19.

“The reality is that Barbados has tested a higher percentage of our population than a lot of countries in the world. I believe that we are close to just under 1.17 percent of the population, and that is a significant achievement, and by no means, something to be underestimated or ignored,” Mottley said.

She said she hoped that some of the over-36 000 persons, who had drawn unemployment benefits from the National Insurance Scheme, would be able to find employment with the reopening of those businesses.

“We accept that with some businesses coming back on stream, more and more employees will not need to benefit from an unemployment benefit, in the long term, and they are entitled to up to six months, but some of them may well be back to work, within four to eight weeks, depending on the nature of their employment,” Mottley added.