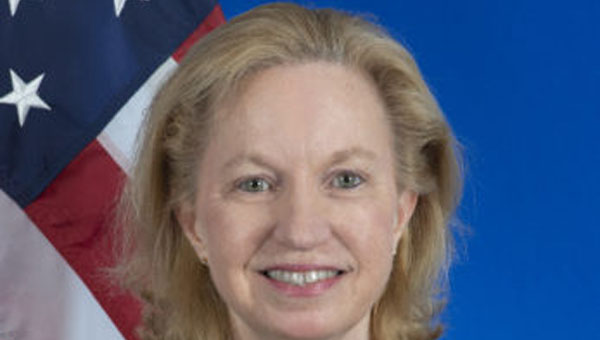 US Ambassador to Guyana, Sarah-Ann Lynch.

GEORGETOWN, Guyana, May 15, 2020 (CMC) – The United States Ambassador to Guyana, Sarah-Ann Lynch, today, pushed for the US-based Carter Centre and the International Republican Institute (IRI) to be allowed into the country, to observe the recount of the ballots, cast in the disputed March 2 elections, here.

The Guyana Elections Commission (GECOM) is currently in the 10th day of conducting and managing the exercise, which, as of yesterday, had completed the re-counting of 421 of 2,339 ballot boxes.

Speaking on the 94.1 FM’s “Jumpstart Morning Show”, the US diplomat told listeners that she had written, again, to President, David Granger, seeking approval for the representatives of these two organisations to be allowed to enter Guyana to observe the recount that began a week ago.

An earlier request had been turned down by local authorities, which like many other Caribbean Community (CARICOM) countries, has implemented measures aimed at preventing the spread of the coronavirus (COVID-19) including a shutdown of its borders.

“I am very interested in getting the Carter Centre and the IRI back here, to complete their work as international observers and as technical advisers,” she said, adding “they did not get to compete their work, because, of course, the election is still ongoing”.

“They are still accredited and they would very much like to come back in, and we think it is a very good idea to have a more robust international observation effort. It is just terrific that CARICOM scrutineers are here, as well as a couple of folks from the OAS”.

But the US diplomat said that these other “observers” amounted to only five, and “there are 10 counting stations…so there are not even enough international observers for each counting station”.

“So it would be wonderful, if possible, a couple more observers would come back,” she added.

But pressed by the host, Gordon Mosely, as to what would the Carter Centre observers be bringing to the table, given that there are already observers from domestic, regional and international organisation observing the re-counting exercise, she replied “a few more people would certainly be helpful”.

“I think the difference between the international observers and the other groups is that they are well-trained on what the electoral procedures are, and the Constitution of Guyana etc., and they are very clear on the specific things that they are looking for.

“So I think a more robust effort would give the citizens confidence that the re-count is transparent…and when it comes to conclusion it can be deemed free, fair and credible,” Ambassador Lynch reasoned.

But Mosely countered by asking whether the ongoing exercise could still be considered “free, fair and credible”, once completed, under the eyes of the CARICOM Observer team, the OAS and the other observers already in the country.

“I don’t think there are enough people to have as robust an effort as we had for …election day, for example. So our position is that it would be better to have that more robust effort,” the US diplomat said, adding “with the end results that the citizens of Guyana feel that the whole process was transparent and credible and that all Guyanese voices were heard”.

Lynch said she believes that the Carter Centre would “lend additional credibility to the process, because the Carter Centre …has been in Guyana, off and on, for three decades, and they have observed all of the last elections in recent history.

Asked again whether the results would be deemed credible given the presence of the observers here at present, Lynch replied “I would hope that there will be credible results and the process will be transparent, no matter who is here.

“I would like to see the citizens have complete confidence, and I think with a more robust effort that would happen,” the US diplomat reiterated.