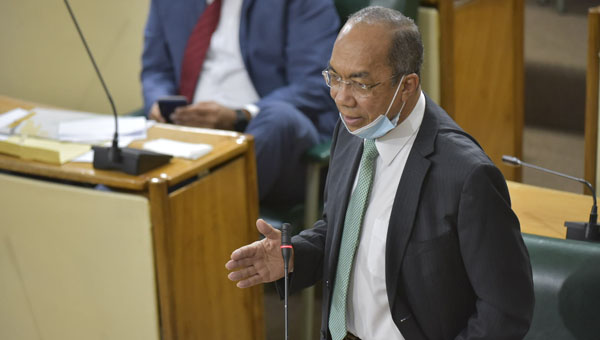 Jamaica's Minister of National Security, Dr. Horace Chang, tables the report of the Joint Select Committee, established to review and report on the Criminal Justice (Suppression of Criminal Organizations) Act, 2014, commonly called the anti-gang legislation, in the House of Representatives on May 19. Photo credit: Donald De La Haye/JIS.

Tabling the report of the Joint Select Committee of the Lower House, on the Criminal Justice (Suppression of Criminal Organizations) Act, in Parliament, on Tuesday, the National Security Minister disclosed that “based on the latest assessment, carried out by the National Intelligence Bureau (NIB) of the Jamaica Constabulary Force (JCF), at the end of 2019, there were 389 criminal gangs operating in Jamaica.

He told the Parliamentarians that 320, or 83 percent, of the total criminal gangs in operation, were classified as “first generation” gangs – by virtue of their loose and unsophisticated leadership.

He explained that these gangs are also identified by the fact, that their main focus was on turf protection and control, for financial gains.

The remaining 69 gangs, or 17 percent, were classified as “second generation” gangs that exhibited more centralized leadership and focused, primarily, on organized crime.

The NIB report showed that there were no “third generation” gangs in operation in Jamaica, described by Dr. Chang as ones with “broad reach, often across international borders”.

“Of note, at the Divisional level, 78 of the gangs, identified across the island, or 20.1 percent, were resident within the St. Andrew South Police Division. This was followed by the Kingston Central and Kingston Western Police Divisions with 13.1 percent and 12.3 percent, respectively.

“Area 5, which has St. Catherine North, St. Catherine South, St. Andrew North, and St. Thomas accounts for the second-highest number of gangs in the country, with 57 gangs, or 14.7 percent. They were followed by Area 1 (St. James, Westmoreland, Hanover and Trelawny) with 51 gangs, or 13.1 percent,” Dr. Chang announced.

Noting that in many communities, across the island, gang members enjoy strong community support, which makes it difficult to isolate them, Dr. Chang added “Even so, over the last three years, there has been a significant increase in the number of gang members identified, apprehended and prosecuted.”

In 2019, Jamaica recorded 1,326 murders, with authorities acknowledging that most were gang-related.