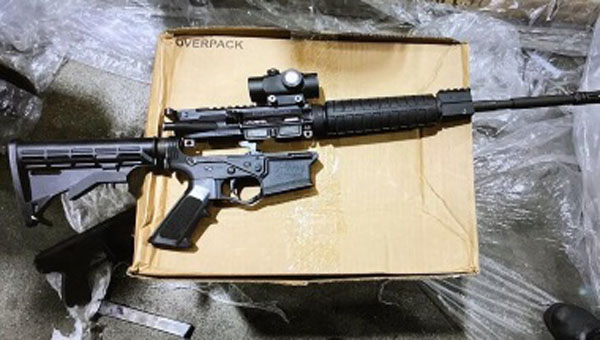 The M4 rifle (in photo), a Tech 9 pistol and ammunition magazine, manifested as toys, that were destined for Guyana. Photo courtesy of the US Customs and Border Protection (CBP) agency.

US Customs Intercepts Guns, Drugs And Money Destined For The Caribbean

MIAMI, Florida May 22, 2020 (CMC) – The United States Customs and Border Protection (CBP) agency says it has seized guns, drugs and money that were being exported to the Caribbean, from the United States, through the Miami International Airport (MIA).

“The outbound cargo environment in Miami is the gateway to the Caribbean and South America, in which criminal enterprises attempt to use transportation routes to traffic drugs, guns and money,” said Christopher D. Matson, CBP Port Director at Miami International Airport.

CBP said that officers, assigned to the Outbound Enforcement Team at MIA, intercepted two weapons, over 38 pounds of marijuana and US$48,000.00 in different outbound shipments of cargo.

The shipments of contraband originated from the eastern region of the US and were destined to Guyana, Antigua and Costa Rica, CBP said.

It said on May 8, officers seized four packages, containing cereal boxes, cans of crackers and an iced tea container that concealed marijuana, weighing over six pounds, destined for Guyana.

On that same day, CBP said officers intercepted over 32 pounds of marijuana, concealed in cereal and diaper boxes, destined for Antigua.

Five days later, the CBP said it seized one M4 rifle, a Tech 9 pistol and ammunition magazine that were manifested as toys, and destined for Guyana.